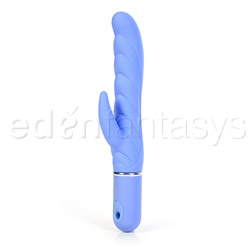 Both the shaft motor and the clitoral stimulator motor are controlled by the same two buttons, so they can not be used independently of each other. These buttons are by the hole through the plastic base, which is screwed off to insert the two AA batteries. One button controls the power (on and off) and the other button controls the vibration functions (10 in all). The different vibration patterns vary from escalating to pulsating and every combination in between. The location of the buttons are convenient for use when the toy is inserted vaginally, with the hole in the plastic cover assisting in locating them
It is a battery guzzler, though. As with all battery operated vibrators, I put fresh batteries in and turned the toy on the lowest setting, checking on it every ten minutes or so for decreased power and toy heating, then repeat the process on the highest setting several hours later. On low, fresh batteries lasted only an hour before there was noticeable loss of power within the vibrations, but no heating of the vibrator, with vibrations stopping after another half hour. On high, the vibrations started to dwindle after forty minutes with some heating of the motors felt through the silicone, with vibrations stopping after an additional 20 minutes.
I was impressed with how quiet this toy is when on, even on the highest setting. It is quiet, even when on the highest setting. It is also waterproof, performing well in the tub, creating cool ripples in the water from the clitoral stimulator.

As with any silicone toy, this one should only be used with a water based lube. The ridges in the shaft may cause some difficulty with cleaning, but a soft tooth brush with hot, soapy water works well. When cleaning this toy, be sure to dry it well with a soft, lint free cloth.
Once it is clean and dry, it can be stored in a cool, dry place. If left in natural light for long periods of time, the color may fade, so keep this in mind when deciding where to store it.
Follow-up commentary   I don't like it anymore 18 months after original review
With all the other duo vibrators out there, this one is not my first choice and, in fact, it is one I very rarely reach for, in fact, I do not even keep batteries around for this toy.
Several factors contribute to my decision to no longer use this toy. The biggest factor is the tip of the clitoral stimulator. After a few minutes of use, it begins to feel like needles on the clit, add that to the fact that the dual motors are not independently controlled, and it makes for some uncomfortable situations.
I do still keep this toy on display in my playroom, though, since the playroom accent color is light blue.
This product was provided at a discounted price in exchange for an unbiased review. This review is in compliance with the FTC guidelines.