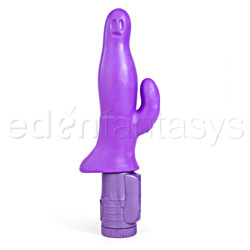 Casper was never so friendly...

A good, not great, toy. Good place to start in multifunction as it isn't overwhelming in terms of appearance or gadgets. Rotation and lack of good multi-region contact is a minus. Great for clitoral orgasm with the bonus of feeling full as well.
Pros:
Good construction, strong vibe, safe material.
Cons:
Rotation is too limited to provide G-spot and clitoral stimulation simultaneously.
Rating by reviewer:
4
useful review

This is a very solid multifunction vibe. It has a rotating shaft area as well as a clitoral stimulator in the form of just a simple appendage. It had good girth to it and is filling and the motor does not bog down even under strong pressure. It is best served for clitoral stimulation, with the added bonus of providing a full vaginal feeling as well.

It is made of a TPR/Silicone composite, which is very smooth and not at all tacky or sticky. Easily cleaned with soap and water, toy wipes, and alcohol. The small "ghost" face is to one side and provides no notable sensation, it's purely aesthetic and whimsical.

The overall design is very simple, a tapered shape small at the tip and thicker as you progress down the shaft with a bit of a bulge just before the end, where it comes to a sort of flared area as though they had considered adding a scrotum and then (at the risk of startled faces) simply cut that area off to add the control module. The toy itself has a good weight to it, not cheap feeling, but not cumbersome, one could say it fit the Goldilocks toy selector guide and is just right. It should be good for both novices and more experienced users in terms of size and shape given it's graduated design. It is a bit on the larger size overall though, so you will need more than a simple bedside table drawer to conceal it.

The motor is a bit noise on it's highest setting but once inserted the noise, most of which is the vibration of the parts them selves and not the motor, is quickly subdued and while audible, not so much as to be embarrassing. Simply turning the tv on at a low volume or running the shower would provide complete cover.

It is easily controlled by two sets of up/down arrows, one for rotation, one for vibration. Each setting has three intensity levels, and with a bit of use and practice, they could easily be handled blindly as the controls are slightly raised above the flat control face. A third button controls the rotations direction, from clockwise to counterclockwise.

The vibrations in the clitoral stimulator are this toys strongest value. On the lowest setting my wife was a few short minutes from a solid orgasm, and on high there was the joy of watching her squeal, thrash and twitch as it simply drove her insane.

Overall this toy functions very well, and to watch the wife thrash through multiple orgasmic waves would pretty much sum up it's effectiveness, or one would think. This toy does seem to have a downer unfortunately. With all due respect to there simply being differences in anatomic geometry, there is not enough rotation, or at the least it is too far to the tip to provide a great deal of stimulation. The absence of a rotating bead area or movement in the thicker end of the shaft makes it too deep to provide both g-spot and clitoral stimulation simultaneously.

There is a waterproof claim, and the control box seems well sealed including the screw on battery cover, but this feature was not part of our initial test run so i can not vouch for it as yet.

Care was very simple. It is a TPR/silicone composite and as such needs to be cleaned well, but it is not necessary to scrub, just a generous soap and warm water hand wash and a gentle pat dry. It can be wiped down with an alcohol swab if desired as well. Then simply put it away. The material is soft so I would recommend as always keep it from sharp areas top avoid potential nicks and cuts.

As a silicone-based toy no silicone lubes should be used, but it will play just fine with your water-based concoctions.

It came in a typical industry package. Multiple languages, photos of an attractive model in the throes of ecstasy simply by holding the toy in her hand. No instruction offered. I find most dildos and vibes fall into more or less turn on, insert, remove, repeat, and as such i give most of them a pass on this shortcoming as overall the use is simply operator discretion. Not really gift box worthy, simple store shelf packaging.
Follow-up commentary   I still like it 22 days after original review
This has become a favorite. While the rotation still leaves a bit to be desired we've found the perfect angle and spot for the appendage and getting off multiple times quickly is a snap. I would recommend this to anyone looking into a new toy that doesn't want all the rotating bells and whistles but wants the combination of insertion and strong clitoral stimulation.

In response to comments, the toy is about 1 and 3/4" at its thickest point near the control end and tapers to between 1/2" and 3"4" at the rotating tip.

This has gone from a strong 3 star to a 4-4.5 star in our book.
This product was provided free of charge to the reviewer. This review is in compliance with the FTC guidelines.