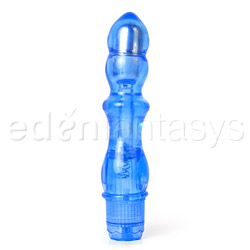 EdenFantasys
Other Dazzle me sparkle reviews

This toy is all about shape without sacrificing size. The toy does sacrifice power, but the pleasure from the shape makes up for it completely in my eyes.
Pros:
Curvy, Flexible, Pretty Color,
Cons:
Slippery controls, Weak vibrations
Rating by reviewer:
4
extremely useful review

The Dazzle is made from TPE which is much safer than jelly products (it is phthalates free, latex free, and hypoallergenic). It is slightly tacky to the touch and has significant drag so lube is really helpful. There is a slight plastic scent when it is removed from the packaging (which is plastic, so the smell could be from that), but the smell quickly dissipates. There is no real taste to the toy.

TPE is a soft material that has great give to it which makes the size of the toy a lot more manageable. There is a seam around the top part of the toy and along the side, but it is hardly noticeable visually and cannot be felt during use.

This toy is for those who like things a bit shapely. The Dazzle is curvaceous and sexy. The TPE is flexible and allows the larger size of this toy to be comfortable for different anatomies. I could bend it to gain the exact angle I needed. The ridges of this toy rested behind my pubic bone and it was a pleasurable experience for me when thrusting.

The shape is the best part of this toy for me and it did not let me down. The extreme shape of this toy combined with the larger size (it is significantly larger than the similar blueberry bliss) makes this toy less suitable for beginners. It is helpful to know if you like toys that are shaped like this before trying it.

Though the design of the toy was a huge success, the controls were not. The toy is a simple dial wheel which is made out of smooth plastic. The wheel is harder to grip than other toys when it is lubed up (and I found a need for a good amount of lube with the Dazzle). I couldn't turn it off at all the first time I used it because the toy was so slippery. This would have been a huge problem if I had been say, interrupted and needed a quick shutoff for the toy.

Though the controls are less than perfect in use, they allow you to set the specific intensity you want instead of having just a high, medium, and low.

The Dazzle takes 2 AA batteries which are easy to install in the toy. So far this toy is not a significant battery guzzler for me. Compared with other AA battery vibes I own, this is on the weaker end of power. It is not for those who want their toy more powerful.

This toy seems to live up to its waterproof advertising for now although the O-ring looks cheaply made. The toy echoes in the shower and feels super loud, even though it is pretty quiet in the bedroom.

Because it is waterproof, cleaning with soap and water is a breeze. I let this one air dry because it is a lint collector. Because of this, it is important to clean the toy well, and to be careful about how you store it. I have resigned myself to not fighting its undying attraction to pet hair and just accept it wont be pretty in storage. It is important to clean it before and after use.

TPE also does not play nice with toys of a similar material. I accidentally caused some surface blemishes by storing it too close to a toy that apparently was made from the same thing. TPE does play nice with silicone toys or silicone lubricant. Water based lube should be used with this toy. Because of the material incompatibility and lint-magnet factor, this toy is difficult to store for me.

Because the toy cannot be sterilized like silicone, using a condom when sharing is important.

The packaging for the Dazzle is not discreet but not trashy. It is a simple plastic clamshell style box with a paper insert telling you about the toy. The package could be used for long term storage but I chose not to. The toy is in plain view and thus not really that discreet. The package boasts Cal Exotics' "Safe & Pure" logo.

Personally, I prefer to use this toy for the shape rather than the vibration power. The shape is what makes this toy so wonderful for me. The vibrations are lacking and not the shining star of this product. The shape and material of the Dazzle has moved close to the top of my toybox.

Waterproof turbo glider blueberry bliss
$15.99
Follow-up commentary   I don't like it anymore 2 months after original review
I really liked this toy. Shortly after this review, a piece of plastic broke off in the cap and now the speeds don't work at all. I went about seeing if I could get a replacement since it was still within the 30 days. I contacted Eden, who suggested I contact CalExotics directly. I did and no response whatsoever. The quality of this toy just wasn't up to par with what I expect from a toy.
This product was provided free of charge to the reviewer. This review is in compliance with the FTC guidelines.