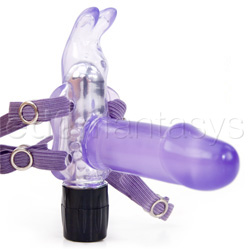 What a disappointment! The straps did not do what they are supposed to do and it frustrated me more than anything else. A complete waste of my money
Pros:
quiet, simple to clean
Cons:
vibrations not strong enough, straps do not work properly
Rating by reviewer:
1
useful review
It was a complete and utter disappointment. It looks very promising, but this toy proves that looks can be deceiving. I tried to use in in a solo venture, and it was just frustrating. If anything, I ended up turned off rather that pleased. I did not use it with any other toy, because i thought it would be enough by itself, but i was clearly wrong.

The penis was a bit small for me, and even my boyfriend said that i needed something bigger when he saw it. I did tangle myself up in the straps getting it on, but that could be attributed to my clumsiness. The straps did come loose quite a bit throughout the time i was using it. They were also a little scratchy against my skin, and that bothered me a bit. The rabbit ears and nose could have been more pronounced for me because they barely grazed my clit.

The batteries only lasted about twenty minutes which normally would have been enough for a session for me but, considering my laziness, changing batteries every time i use it is kind of a hassle, should have lasted longer.

Cleaning was a breeze because i used it with a condom. I recommend using this method because, I've used jelly toys before and while they may look clean, after a little while you can't get the smell off of them. The toy is small and discrete and kind of cute so hiding it is fairly simple. Just throwing it in the back of my underwear drawer did the trick.