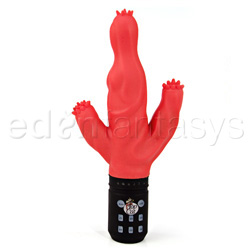 The first time I used the toy, I came pretty quickly because the vibrations are pretty powerful and really stimulating. But the second time I used the toy, I didn't feel like the vibrations were reaching my clitoris or the outside of my anus as well as they were reaching my vag. A problem I had with the different vibration options: the buttons are located right on the handle, where you grip the toy to push it in and out of you, and are really easy to bump accidentally. You could be about to come, but then touch the handle in the wrong place and startle yourself because the vibration style has changed. I also had an issue with the vibrator turning on by itself due to the placement of the buttons, which was quite embarrassing. I ended up pretending that the loud vibrating sound was my &quot;vibrating alarm clock,&quot; but of course my boyfriend's roommate knew what was going on.