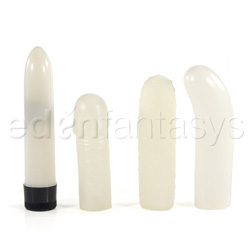 Use it as a glow stick if you want; but I can't recommend it; at all. The motor is weak; the sleeves are incredibly hard to put on and it's too hard.
Pros:
bright glow.
Cons:
everything else.
Rating by reviewer:
1
useful review
I got this kit from another site; luckily it was on sale and I didn't waste tons of money on it. When I opened it up; the product seemed promising; the sleeves were really bendable (already a plus over some of my other sleeve sets.) the vibrator seemed to have a little power. BUT I was wrong. while flexible; none of the sleeves fit right. Unlike the other reviewer; who got one to fit; I was stuck with trying to jam all three on.

I found the most success using the powder that you get for vac-u-lock sets. after struggling that much; I was almost to the point of giving up. But I had finally gotten the darn thing on and I started to play. I found it very uncomfortable. The one sleeve had a sharp point that left me with a little scratch. (I think it was from the molding). Needless to say I gave up on the sleeves, and tried it by itself.

It also had very little grip on the bottom; so as I was trying to push it in and out, it would slip out of my hands, which really killed my rhythm. I pulled it out a few times after just to see; but I ended up throwing it out the last time I cleaned my room.

Overall, I would say it was a waste of money for me. Its best use for me was testing batteries for my other toys since it only needed one.
Follow-up commentary   I still don't like it 6 months after original review
When moving all my toys and clothes over to my fiances apartment... I just decided to toss this out. it wasn't strong and even the toy cleaner I used last time didn't prevent the stains... Overall I would still say forget it... not worth it. pay a little more to get a better set.
This content is the opinion of the submitting contributor and is not endorsed by EdenFantasys.com