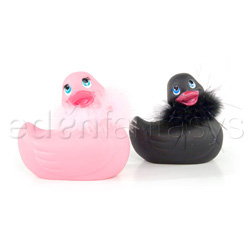 This is an adorable duck that makes a great decorative object but makes a horrible adult toy based on its shape.
Pros:
Pretty, Cute idea, Decent vibration
Cons:
Uncomfortable shape for sexy play
Rating by reviewer:
3
useful review
I'll admit it: I bought this duckie because I'm a sucker for anything cute, and even more so if it's both cute and punny. She's really pretty, too. I've got the pink one, and this is totally one toy you can leave out in plain sight as a decorative touch without anyone thinking twice about it. It's more or less rubber duck like in texture and give, albeit larger and quite a bit heavier thanks to the batteries and the motor. The boa is looped over the neck with the two ends connected via velcro, so it's easily removable (a very good thing given that it's not something I'd want near my bits or to dunk into water) and it's your choice whether it's worth keeping around for added elegance when keeping your duckie on display. Personally, I found that the tiny fuzzy thing disappeared to parts unknown pretty early on, but your experience may vary. The Swarovski crystal on the beak is shiny, as they generally are, and serves no practical purpose aside from looking nice.

I believe this toy is made from PVC, so the material is fairly safe, and it's waterproof to boot. It's easy to wipe clean, which is a good thing since the shape does not lend itself well to protective covers. The toy's vibrating function is turned on via squeezing the body, which can be a little difficult to operate. The motor is decent and there's a fair amount of vibration to it with several different functions, but honestly I find that particular issue somewhat irrelevant with a toy of this variety because the shape really doesn't lend itself well to anything sexual at all. Much as I love this toy, the duck is all odd angles and weird poky bits that really don't meld well with my bits at all. I tried it in every position I could think of and there was always something poking me at an uncomfortable angle no matter what I did. The beak, cheeks, and tail are placed entirely wrong for using either the top or the sides for that kind of play, and the bottom of the toy hosts the battery compartment, which I'm also uninterested in rubbing up against.

All in all, I'd say my take away message is that it's a cute rubber duck, very pretty to look at, and entirely useless as a sex toy.
This content is the opinion of the submitting contributor and is not endorsed by EdenFantasys.com

My Paris duckie tags
About author