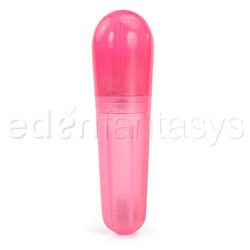 I bought this as a gift for my high school girlfriend because it was the least realistic toy that I could find. However, it still reminded her of a penis somehow (which bothered her due to a recent assault), so I stole it back from her. I fell in love with it, and its use outlived that relationship. In fact, I still use it as a backup vibe. It's still going strong at 5 years old!

I could not imagine using this for anything other than clitoral stimulation. It just isn't the right shape or length for penetration, as the tip is the widest point then it gets narrower, and it is not fluted at all. It was too big for us in high school, and I still would prefer to just use it on the clitoris. It might be useful for the nipples as well, but mine are not very sensitive so I do not know.

It is a cute, feminine, and unintimidating toy, perfect for a girly girl who loves clit stimulation!

The material is hard latex-free plastic. It's easy to clean with a toy cleaner, as it is non-porous. It did get a little hot after extended use, but it wasn't a big deal.

It is clearly not designed for penetration, as I mentioned earlier. The tip was a little bit too wide for me, and if one did attempt penetration with it, it would be difficult to retrieve as the "tail" is very narrow. It is best for clitoral use, in my opinion. It is small, cute, and I have taken it on many trips with me. Although its function is somewhat apparent, the toy can easily be hidden in any bag or drawer.

The batteries last much longer in the Cute Baby than in my other vibrators (which are mostly bullets). The vibrations are controlled by twisting the cap, which can be a bit cumbersome.

The toy is not too noisy, but it's also not too strong. If you have an "iron clitoris" like I do, you will have to push it into your clit. However, if your clitoris is sensitive, you will be pretty satisfied with a light touch.

Cute Baby is splashproof, which means that it cannot be submerged, but it's not going to malfunction around a little moisture. I did not test this, but I've also never had a problem with it.

Since the toy is not waterproof, it is best to use a specialized toy cleaner to keep it sanitary. I easily stored it in a drawer under my bed. I did not need a lube because I did not insert it. However, if you like a little bit of lube when rubbing your clit, you can use a little bit of water-based lube on the tip!
Follow-up commentary   I still like it 3 months after original review
I have very fond memories of this toy and it will always have a special place in my heart. I found it at the bottom of my drawer last week and saw that it had totally fallen apart. Not bad for a six year old toy under $10!
This content is the opinion of the submitting contributor and is not endorsed by EdenFantasys.com