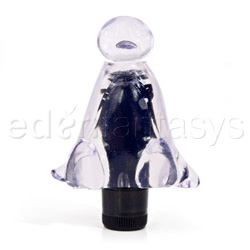 I wasn't overly impressed with this toy simply because it didn't do anything for me. I didn't feel it was powerful enough and I suppose I was a little reluctant to use it because it wasn't made from completely safe materials.
Pros:
It's small, discreet and quiet.
Cons:
The vibrations weren't intense enough for me and the cleaning fluid could only be used once.
Rating by reviewer:
3
useful review
Lately I've been feeling a little sensitive so, in the future, I decided I'd be on the look out for a specific kind of toy to satisfy my needs: soft and hypoallergenic (preferably!). I ordered the Petz Penguin|Portable pleasures petz penguin - Vibrator kit just before this turn of events so I was a little concerned.

I didn't have a major problem with the jelly sleeve but I was reluctant to use the flavoured lube that came along with it. Certain types of lubricant have a tendency to irritate me so I often avoid them unless absolutely necessary. Aside from this, the Penguin was a delight to use. As it’s controlled by use of a magic bullet, the controls are easy enough to use. It's possible to use the sleeve without the bullet for massage and tickling but to be honest it didn't do much for me at all. It was just a little bit too soft.

The Penguin came with its own toy cleaner but this could only be used once as there was no way of storing it once it was opened. I think it would have been better if it was placed in a sealable container rather than something that had to be opened with scissors. As the sleeve is made of jelly, however, it’s easy enough to clean with warm water [Editor's note: jelly is porous and can't be sterilized. Use a condom if possible, or avoid sharing between partners/orifices].

As it's so small, the Penguin is certainly discreet, but I'm a little disappointed that it didn't come with its own bag or container. It's also one of the quietest vibrators I've owned which is a definite plus, but I couldn't say I was overly impressed with the Penguin.
This product was provided free of charge to the reviewer. This review is in compliance with the FTC guidelines.