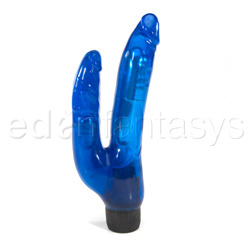 Because the toy is made of rubber, it attracts a lot of dust. Frequent cleanup is necessary and fairly easy with warm, soapy water. However, as a rubber toy, it cannot be sterilized, so you should use condoms if you plan on sharing it. [Editor's note: it also contains phthalates, so it's a good idea to cover regardless.]