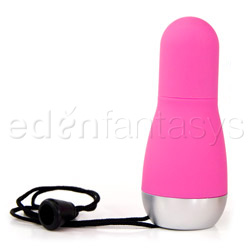 Since I'm always running around with either a purse or a gym bag, this thing makes total sense for me. For these reasons, I can see how it would be a perfect addition to the toy chests of both first-time vibrator users and seasoned vets who need stimulation on the fly.
Rating by reviewer:
3
useful review
Rarely are sex toys so incredibly intuitive, so instantly gratifying and so bloody discrete. Open the cute little packaging and find that not only is the toy the simplest thing in the universe to assemble, but there are actual batteries included. So within a minute of receiving the order, you can be revving your engine with a strong, solid vibration.

Now, granted, it wasn’t on my first attempt that I figured out how to put the batteries in correctly (hint: try one with the positive end downward and one with the negative end downward). In fact, I was distraught to see there was no plus sign and minus sign telling me how to insert the batteries. But eventually my 20 plus years of education was put to some use, and things worked out fabulously. Once you have the batteries in and the cap replaced, from here on out it’s smooth sailing: turn cap, locate clitoris, and go. No bells, no whistles, no pulleys, levers or buttons, just one mean vibration followed by the easiest toy cleanup you’ve ever known.

The Discretion is tiny enough to stash away nearly anywhere, has a handy string to wrap around your wrist for extra convenience (although it can be a minor annoyance: keeping it out of the way of the action) and works in the shower without any fear of accidentally killing yourself via electric shock. And, as I said before, cleanup on a toy could not be simpler.