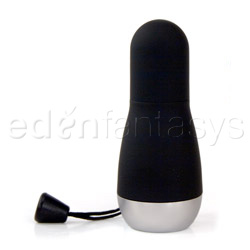 A great toy for vacations or car use, but too loud for public and too simple for home use. The battery issue may be due to my location, but it's worth checking into before buying. This toy would be a great addition for couples play, my hubby loves it!
Pros:
Great texture, good shape, handy cord.
Cons:
Llouder than expected, battery replacements expensive.
Rating by reviewer:
3
useful review
I was very excited when I originally saw the posting for this toy, with its discreet shape and silk texture. With its claim to be a go-anywhere toy, I was looking forward to taking this little fellow in my purse for whatever adventure I may need it. When the Discretion Widebody|Discretion widebody came in the mail, the packaging was ok and the product was ready to go out of the box, once the battery was inserted.

It was a little strange how the vibrator was stored, because there is no switch or dial on the end. Instead, the cap makes contact from battery to motor every half turn, with three and a half turns on the thread. What this means is that to store the vibe in your purse and leave the battery inside in the correct orientation, you have to keep the cap screwed just barely on (and really, who or what actually enjoys to be barely screwed?) or almost fully screwed(tantalizingly, perhaps?). Basically it took some getting used to. And yes, unless it is in a separate compartment it will undoubtedly turn on while you are talking to your boss (true story); but no worries, my dears, because you can (in your most shaky voice) tell them it’s your new cell phone ringing and fumble with one hidden hand into your bag to turn it off.

For this little warrior’s first go at me, I set the stage on my balcony one evening to see if conversations on neighboring balconies (none of which have a line of sight to mine) would go hushed or giggly if they heard a buzz buzz from my direction. Fully clothed with a cup of coffee in hand, I turned the vibe on and let it rattle across the table for three minutes, twelve seconds. It was not loud until it ran into my spoon (!), and in hand, the vibes were great. No attention was really given by my neighbors, although my next door looked at me differently later that evening by the lifts. Back inside, I set to work trying the toy through clothing and against skin;  while the vibes were good, I found the lack of variable speeds to take away from the experience. With gusto I engaged my full attention towards a quenching orgasm. Though one was eventually achieved, the learning curve of a single-speed toy meant more noise while the thing rattled away in mid-air and distraction for me. The texture of the toy is superb, feels great while wet and slides nicely on dry skin too. In the shower, this toy was loud, in my opinion, and while I was looking forward to trying this in my local sauna, I think it would draw too much attention. For home use, I think there are better small toys|Small and discreet vibrators than this, but if you’re going out, it’s passable. Finally, I was peeved at the battery situation, as the replacements for this toy would cost almost 12 CAD, which is not worth the cost of the toy in my opinion.
This product was provided free of charge to the reviewer. This review is in compliance with the FTC guidelines.