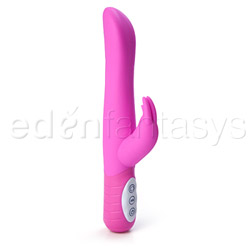 Does the job, but that's not saying much....

For beginners and those looking for a smooth ride, this may be the toy to tickle your fancy, but if you like a few bumps in your road to fruition, it may just ruffle your feathers.
Pros:
easy to clean, Non-porous material, lightweight
Cons:
weak vibrations and rotations, a bit too skinny
Rating by reviewer:
3
extremely useful review

The silicone is wonderful on many levels. First, as being one of the most sanitary materials that a toy can be made of puts one's mind at ease. The smooth soft texture of the material allows for minimal lube. The silicone produces no smell, which has been a problem with other silicone toys. If you are looking for a toy that is soft and smooth to the touch, this may be the toy for you.

The shape and design of this toy is functionally simple. It's three pronged clit tickler easily slips between the labial tips towards its target. The shape of the shaft allows for increased stimulation for the G-spot. This toy has a sleek and slim nature to it with a circumference of 4 1/2" and a diameter of 1 1/4". The overall length is 9" with 5" being insertable makes this toy a bit too obvious for day travel but will easily hide among your things in your carry-on or checked-in luggage. Weighing in at only 9.7oz makes it good for longer play sessions.

The vibrator is located in the shaft, rather than the clit tickler. The controls light during use and the on and off switch controls both the vibrations and the rotations. The controls are easy to use and require a bit of push to work so there is little chance of accidental activation. More experienced users may find the inability to control the speed and function separately a bit frustrating. The Tripler offers three speeds of rotation and three speeds of solid vibration along with four different pulsing vibrations. The pulses include 2 quick pulses on medium and high intensity, a constant buzz that goes back and forth between low and high intensity and one that does 2 short and a long pulse on medium. Those with sensitive clits will find the buzz intense without becoming numbing. Those that seek out a real buzz will find this slightly underpowered. The rotations provide a nice pressure on the G-spot, though more experienced or less tight users may find them a bit shallow. The toy has some noise at the higher speeds, but this is easily muffled by a blanket. The Tripler states that it is waterproof, but the way the battery cap locks would make one hesitant to try this, as other reviewers have stated.

The silicone material makes this toy a breeze. It can be cleaned with wipes, soap and water, or toy cleaner and then wiped dry. As stated before keeping the batteries and toy separate when not in use to prolong the life of both. Ideally, do not store this toy next to other silicone toys and preferably kept in a lint free pouch. Also, use only water-based lubricants with this toy.

While looking to find something to replace my old butterfly I came across the Tripler. What drew me to the Tripler was that the silicone material was an improvement over the elastomer of my last toy and the shape was similar to my ex's penis. I also liked the simple controls and that the batteries have their own compartment which means leaving them out of the toy so as to extend both the life of the batteries and the toy is much simpler then before. As my title says, since beginning to play with this toy I can achieve orgasm. The problem is that getting there is not that exciting. In part this is due to a common complaint about rabbit vibrators, that there are issues of anatomy involved and the minimal flexibility means that even when I position it in a place where I hit both my clit and G-spot, the tickler only touches my clit, rather than sliding over it. The other issue for me are the weak vibrations and rotations. The result of this combination is that there are no spikes of pleasure intermixed with the gradual climb to climax. If the vibrator was in the clit tickler rather then the handle end of the shaft or the shaft was even a bit thicker, this may have been strong enough to give the fireworks I like in a toy.
This content is the opinion of the submitting contributor and is not endorsed by EdenFantasys.com