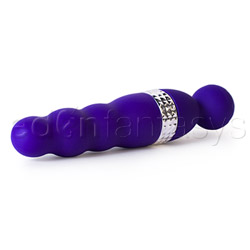 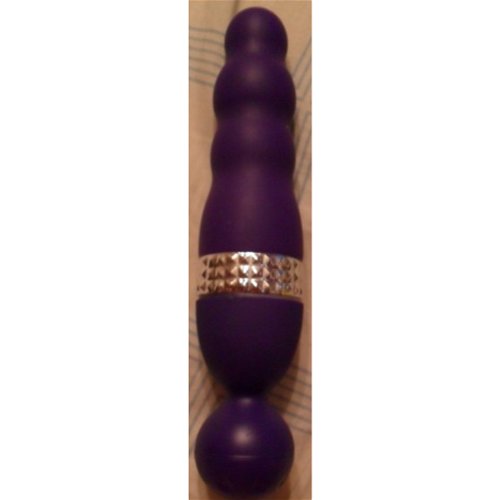 Tina is made of 100% body safe silicone which rates a 10 on Eden's safety scale. She is hypoallergenic, non-porous, latex and phthalates free. I own a good number of silicone vibes (or have, as I have sold some) and I think this silicone feels pretty nice compared to some. It has a plush feeling to it, a little bit of give while still being firm enough to thrust without being floppy. It is velvety, soft, matte feeling to the touch and has some drag to it that I happen to find nice on this particular toy. If the drag bothers you, simply apply some water based lubricant to the toy.

The material is suitable for any user.

Here is a photo showing how flexible the shaft is: 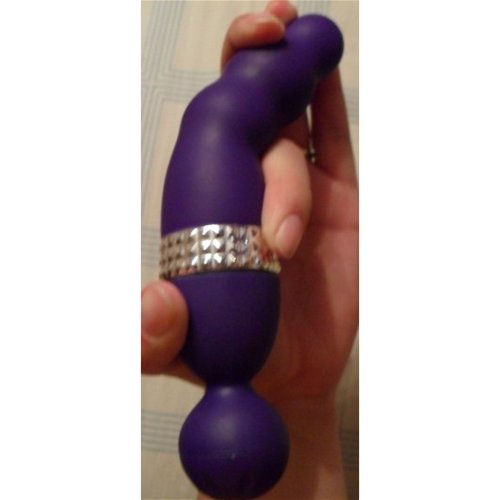 Rock star Tina has a unique bulged design that reminds me of the Icicles No. 2 and is what ultimately prompted me to try it because I really liked the bulged feeling of the Icicles glass wand. Tina has 3 bulges with the top one being smaller than the other two then it tapers out to the battery compartment and down into the smaller rounded handle part which is also the turn dial.
At first glance it may be intimidating to beginners but with a circumference of of 4 1/2" it shouldn't be uncomfortable to you. The size should be suitable for most people but those that have to have girth may not be satisfied with it.
The bulges can be felt when thrusting but are not overstimulating or uncomfortable. If you are curious about texture and glass is intimidating to you then I think this vibe is a great place to start. The bulges feel wonderful and add for a different experience/sensation to the normal traditional straight vibes. The rounded tip makes it nice for thrusting and being that it is silicone it won't bruise you internally. It does have some flexibility to it so you could try to angle it some if you wanted to try to hit different spots.
The measurements are:
Length: 7 1/4"
Insertable length: 4"
Circumference: 4 1/2"
Diameter: 1 1/4" 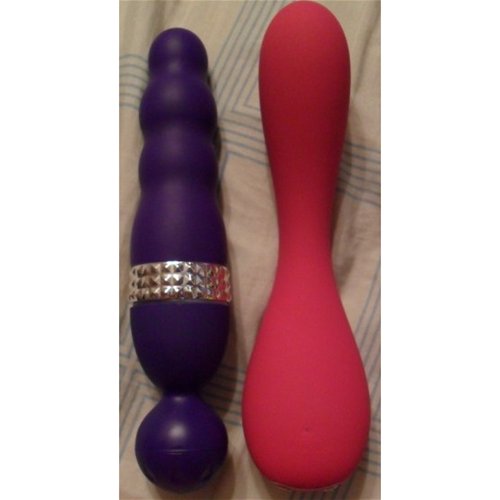 Tina is a multi-speed vibrator that runs on two AAA batteries. The plastic base under the silver metallic strip unscrews and this where the battery compartment is located. One thing I want to mention is that when you insert the batteries and screw the cap back on you do not need to screw it on as tight as you can get it like you do with most vibes. If you do that you will end up like me thinking you received a defective toy. Just screw it on until it is closed and the clear o-ring is showing. If your toy won't turn on just loosen it a bit more and it should start up.

There are no modes with this vibe, just steady vibrations with increasing speed. Turn the dial which is the round bulb on the end up or down to increase the speed. The dial isn't hard to use but being that the battery compartment is a pain I did accidentally unscrew it while attempting to turn the dial so you don't have to use a lot of strength when turning or that is what will happen.

The vibrations are felt mainly in the tip and middle slightly down to the plastic base. The vibrations don't travel well into the handle so it won't leave your hand numb like some vibes do. The vibrations are like a deep buzzy feeling.
Tina is fairly quiet and won't be heard outside of a closed door but it would be heard within the same room.

Tina is marketed as waterproof but I didn't test it out. If you choose to do so, I would be careful because of the battery compartment. You will want to make sure it is screwed on tight enough so that the water won't get in but also not too tight as the toy will not turn on.

Rock star Tina is a bit of a lint magnet so you will want to store it in a place where it won't be exposed to fibers it will attract.

Only use water based lubricant with this toy.

To clean you can use warm water and mild soap, toy cleaner or wipes.

The packaging is not very discreet at all. 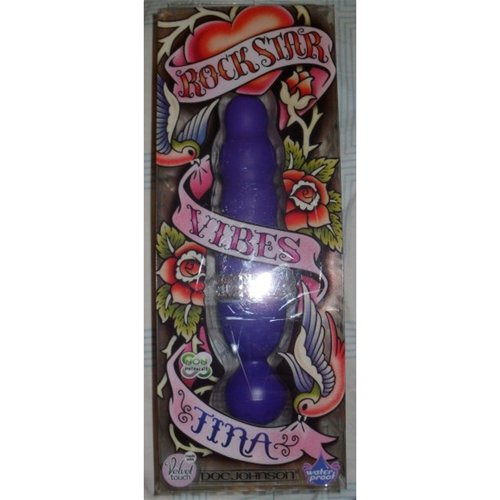 There are directions on how to use this vibe located on the back of the package.

I really liked the feel of the silicone of this toy as well as the bulges in the design. I must admit that I was a little disappointed that it wasn't as strong as I was hoping it would be. It isn't enough for me externally but can get me there internally. It is rated an overall 4 vrooms on the product page but I just don't feel that this is a 4 vroom toy.

Follow-up commentary   I still like it 2 months after original review
I still like it for it's unique shape but I just wish it was stronger. It did make it to my "keep" pile while recently getting rid of things, so that says something good about it. I haven't had any problems with it.
This content is the opinion of the submitting contributor and is not endorsed by EdenFantasys.com