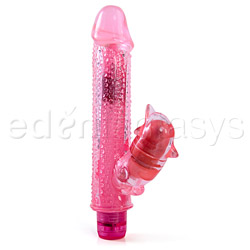 Unfortunately, I was right. Not only does the stiffness of the toy make it a little hard to maneuver (the outside is a thin layer of PVC, but the inside is stiff), but I found the dolphin to be a little awkward. It wasn't the fact that there was a clitoral vibrator that was awkward, it was the fact that it was shaped like a dolphin! I could never seem to get it in the right place, and on top of that, the dolphin's pointed nose was actually a little painful. It's basically a hard, pointy thing where you do not want a hard, pointy thing to be.