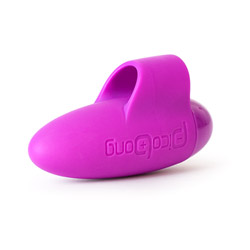 Don't put your finger in this finger vibe!

The controls on this were a bit hard to figure out, but once I did, I was pleased with what I was able to get it to do. Cleaning is a bit difficult as well.
Pros:
High Intensity
Cons:
Finger Hole doesn't stretch much
Controls are hard to figure out
Rating by reviewer:
3
extremely useful review
Finger vibes; I hear those words and I cringe! Usually they are jelly like material, have no power and suck to high heaven. This was not the case with the Ipo by PicoBong, and I am very glad for that.

First off, this is larger than you would think; it measures about 3" in length, so it is a nice size. The Ipo has 12 different settings of vibrations, but most of them are different pulsations. I am not into pulses at all, simply because, anytime I try to use them, I get close to orgasm, the pulse hits a low and I have to start all over. I find it to be very frustrating, so I just stick to the different strengths for the constant vibration. Saves my sanity and my time!

Silicone is usually really easy to clean, but here is where I hit a problem with this toy. As you can see in the manufacturer picture to the left, they have their name engraved into the toy, so you really have to work your cleaner into the groves to get it all clean. If it takes longer to clean a toy, than it does to use it, I am probably not going to use it again.

The controls of the toy are pretty unique, as they have "hidden" them in their logo. I found that to be pretty interesting actually. If you look at the picture, you will see that the "P" has a - symbol in it and the "B" has a +. That, my friends, is the brains of this operation! Press the + to turn it on, change intensity and/or function. The problem with this is that it is not easy to figure out. I think I played with the thing for about 30 minutes and I still couldn't figure out a pattern to it, it just kinda did what it wanted, when it wanted. I may be a sub, but I like to Dominate my toys, and was not able to do that with this one. I just couldn't, for the life of me, figure out the controls on it! I finally was able to get it to just vibrate, without pulsing, and began my test. Um....

The finger hole does not stretch much, so unless your finger is the exact size of the hole, you are going to have issues. My finger was a little bigger, and I was able to get it in, but it cut off circulation, turning my finger bright white and stone cold in a matter of minutes. You can see my finger starting to turn white in the picture here; this was only a few seconds of being on my finger, so I could snap a picture. I decided to take it off of my finger and just hold it instead. For a finger vibe, the vibrations were powerful! Remember, most finger vibes have VERY LOW intensity, and I think I would consider this a 2 out of 5 (5 being the Hitachi of course), which was honestly more than I was expecting.

This toy came in some pretty odd packaging, ok, maybe it was just their use of the die that made it odd. Do you see what I am taking about? Under the toy itself, is a pink on black die. Each side of the die has a different PicoBong toy on it. What the fuck is that for!?  Apparently there is a website listed on the back of the box that explains it all, so I'll leave it a secret for you to find out, haha!

Overall, I am going to give the Ipo a 3/5 star rating, taking off 1 star for the finger hole issue, and another for the engraved logo, which makes it harder to clean.
Follow-up commentary   I still don't like it 6 months after original review
I am not able to use it as a finger vibe, so it is just basically a bullet. I don't use it very often.
This content is the opinion of the submitting contributor and is not endorsed by EdenFantasys.com

My Ipo 2 tags
About author