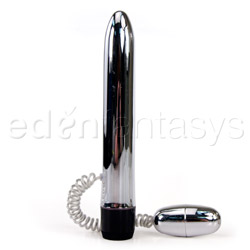 Double the utility, double the fun!

The silver plastic is very easy to clean.