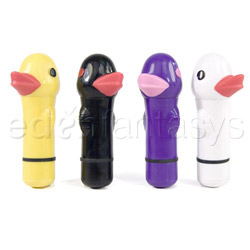 The next way I played with the Duckie Massager was with my boyfriend during sex. Having the ducks’ soft rubber beak massaging my nipples felt amazing. After quite the breath-taking orgasm, I used the duckie on my boyfriend. Placing the ducks’ head and beak right up under his testicles and the other end down against the anus. This had him moaning and wanting more. So we moved this to the bathtub and played in there. Having my boyfriend sitting behind me in complete control of the toy, the waterproof Duckie Massager felt amazing. The feeling of the water around me, and the vibrator moving and tickling just the right places made the moment even more stimulating.

Out of five stars, I would give this product a four. The intensity of the Duckie Massager deserves 4 Vrooms, the vibrations were strong but not overly intense. As for the noise level I would give it 1 Bees, the sound is very soft and can be easily hidden from anyone outside of the room.
This product was provided free of charge to the reviewer. This review is in compliance with the FTC guidelines.