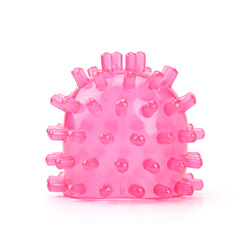 Looking for something to spice up the smooth head of your wand massager? This attachment is covered in small nubs to give your massager new texture. It's like having a whole new toy! It can fit most large sized wand massagers and it's so simple to use. I know I won't be using my wand by itself anymore!
Pros:
Stretchy, Good grip, Easy to put on and remove, Lots of texture
Cons:
Can make massager slightly louder
Rating by reviewer:
5
No votes for this review

This is not a stand-alone sex toy. It is an attachment for wand type vibrators that have the rounded and kind of bulbous head. It gives you a much more textured surface and adds to the stimulation of the toy. The attachment is stretchy and flexible so it easily fits on several kinds of wand massagers. The inside of the massager isn't textured like the description says, but the material itself has a good grip on the head of massagers.

It's great for spicing up any large wand massager. It's really like trying an entirely different toy once you add the attachment.

It's made from TPR so it's got an almost plastic mixed with rubber feel to it. It's stretchy enough that you can pull on it and open it up enough to fit on a wand massager. You just have to pull it lightly down all around the head of the massager. The TPR has enough grip that the attachment doesn't move around much, if at all during use. Getting it off is slightly more difficult than getting it on, but it's not even that much of an ordeal. You can just kind of lift the material off of the wand while pulling upwards and it pops right off.

The attachment has a lot of texture all over the outside of it. There are small nubs about as long as your pinky finger nail and about as thick all over most of the surface of the toy. The texture is definitely very noticeable while you use it as well. You can't really feel each individual nubby, but you can feel that it feels different from using the wand without an attachment.

Even through panties you can tell there's a difference in texture and it just feels great. It could be for beginners or more advanced users. It's really dependent on how much you like textured toys.

This attachment is designed to fit on the head of large sized wand massagers. It has a rigid shape that it holds, but it's also flexible enough to stretch around the head of massagers. The material is pretty thin and doesn't add a lot of extra bulk on the massager either.

It's got the same basic shape as the head of wand massagers, but the whole surface of it is covered in small, flexible nubs. Each nub is about as long and wide as your pinky finger nail. They're not huge, but they still make a big difference in the texture of the toy.

By itself it's fairly discreet because unless you already know what a wand massager looks like and know that they have attachments, it would be difficult to figure out what this is. It's also weird enough looking that people would probably ask what it is at least if it's not hidden though.

It really does add quite a bit of sensation to my wand toy. It's very simple to just put it on the wand right before you use it, and just as easy to pop it back off again to clean.

One thing that I do notice with it is that it makes the wand a little bit louder if you have it turned on, but it isn't making contact with your bits yet. So if you put the attachment on and then immediately turn the toy on before actually using it, it will amplify the volume slightly. However, once I'm actually using the toy I've noticed that the noise level is about the same as it is without the attachment. It's not a huge deal but it's something to think about if you don't live alone.

My wand massager has been my favorite toy for a very long time so I was kind of skeptical on how well this would work or if I would even like it, but the extra texture is actually a fantastic sensation. I definitely plan on keeping it as a pretty permanent fixture on my wand.

This is such an easy to clean toy. You can run it under warm water and use a mild soap to clean it. Since it's just an attachment, you don't have to worry about getting any cords or batteries soaked. You can also use toy wipes. However, because of the nubs everywhere it's just easier to run it under water, put some soap on your hands, and then wildly rub your hands all over it until it's covered in soap, then rinse.

It's small and easy to store away. You can keep it in it's own hiding place or you can just put it back on your wand when it's cleaned off so you know where it is later.

You can use silicone or water-based lube if you need to use any.
Follow-up commentary   I still like it 2 months after original review
I love this attachment so much! My Hitachi Magic Wand was already my favorite toy but this is still a really nice addition. I don't use it too often because it does make things slightly louder, but I do love it a lot.
This product was provided free of charge to the reviewer. This review is in compliance with the FTC guidelines.

Reviewed by Princess-Kayla ♥ (Eden Writer) Not a shred of evidence exists in favor of the idea that life is serious.
Rank
6.6
wrote 201 reviews
Comments
Make a post
Forum
No discussions yet.
Thank you for viewing Eden Elements nubby attachment – textured wand attachment review page!
Top