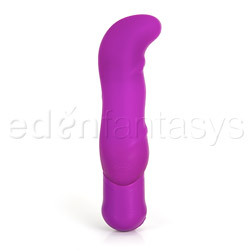 Epona is made from some great silicone material. It is smooth and has a firm body with just a hint of give. I picked the purple Epona, and it is bright and pretty. There is no smell or taste to the silicone at all. If you run your finger along the surface when it is dry and absent of lubricant, there is only a small amount of drag. I definitely recommend using a water-based lubricant with this one. The Epona has a hooked end to help stimulate your G-spot and two ribbed areas lower down. The first rib is about two inches down just below the curve for the tip and only on the one side of the vibrator, the ribbed section is about two inches long. The second rib is about three inches below the first and extends about double the length of the first. This one is also only on the side below the curve of the tip. The ribs are pretty subtle and I didn't notice them at all during use, so a texture queen would not be overly excited about these.

I think the shape of the Epona is perfect for G-spot exploration which is exactly what I used it for. The vibrator only has 4.5 inches of insertable length and I found this to be a little short for me. I literally had all 4.5 inches inserted while conducting my G-spot search. This could just be an anatomy thing for me, but I felt like an extra inch would have been perfect. The circumference of the Epona is 4 1/4 inches and the diameter is 1 3/8 inches. This also felt a little small for me. I'm not a size queen by any means, but I felt this lacked girth during use. The Epona is pretty small compared to most of my toys either in length or girth, so I consider it very easy to conceal. I'm tagging this as a toy for beginners because I think more experienced G-spot players might like more thrusting length and girth than Epona offers.

The care and maintenance for Epona are very easy. Epona can be cleaned with soap and water, a water and bleach solution or a toy cleaner. Toys should be cleaned after each use. Storing Epona is simple because it's so compact. Like most silicone toys, Epona does attract lint, dust and hair. You may want to keep Epona in a ziploc bag when it's not in use to avoid dust, lint, and hair. Another reason to keep Epona in a plastic bag is to limit exposure to other silicone toys. Silicone does not always play well with other silicone, so exposure could result in damage to the material. With that said, you should also avoid using silicone based lubricants with Epona.

Epona comes in a black box with a window so that you can see Epona in it's entirety. It is not discreet but it is nice looking packaging. Epona is inside a plastic blister pack inside the box. The box has information about Epona, but doesn't really have directions or detailed descriptions of the functions. Best of all, batteries are included! This was nice because it meant I could pull it out of the box, clean it and get to playing with it. But, as I mentioned earlier, the batteries died pretty quick.

Using a water-based lube with this made Epona glide! This was my first silicone vibrator and I love it! I found that using the hooked end for clitoral stimulation works quite well. You can place the hooked end just below the clit and let the rest of the body rest against your clit, select your vibration and be on your way to bliss. I found the Epona to be easy to insert and even twist around while inside. It did feel a little strange to feel the point shifting while inside but not uncomfortable. There is a very small seam on the top and bottom of the toy. I don't think it's a major issue, but I did notice that I could feel the seam during removal of the toy. Epona is kind of short, so while I enjoyed using it for insertion, I wasn't quite able to reach G-spot bliss from it. I suspect (from trying a different toy) that this may be an anatomy issue for me and that my G-spot is just located deeper than Epona is able to comfortably manage.
This product was provided free of charge to the reviewer. This review is in compliance with the FTC guidelines.