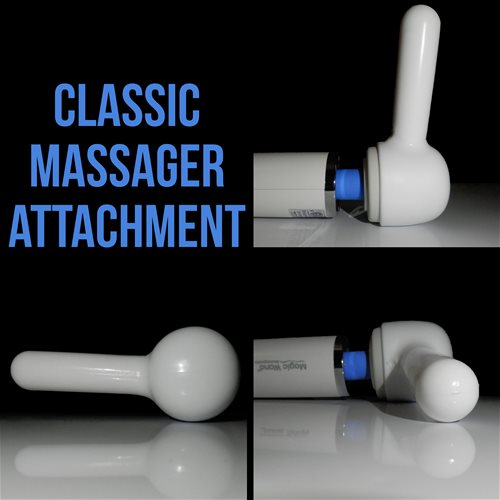 After pulling the attachment over the head of my Magic Wand Rechargeable, the finger-shaped protrusion can be used in many ways.

Externally - First, I tried stimulating my shoulders, nipples, and labia. While the sensations were pleasurable and served as a good warm-up, I preferred this type of external massage from the wand sans attachment. Next, I pressed the toy against my clit, allowing the vibrations to concentrate on the little bundle of nerves. I prefer minimal pressure on my clit, so I found this too intense. However, for someone with a less sensitive clitoris, this may be the perfect tool for more intense sensations.

The attachment is made from white TPR, which feels rubbery to the touch. I found that, even when coated in lube, this rubbery texture ensured a firm grip on the toy. The attachment was smooth, without any added texture. In my opinion, I don’t think added bumps and texture add much to a toy, so I found the lack of texture perfectly acceptable.

The finger-shaped attachment was flexible enough that, even anally, it was very comfortable to use. I did find that I needed to hold the lubed part of the attachment when inserting it into my ass since the toy kept bending as I tried to insert it. However, I did not encounter this problem vaginally. 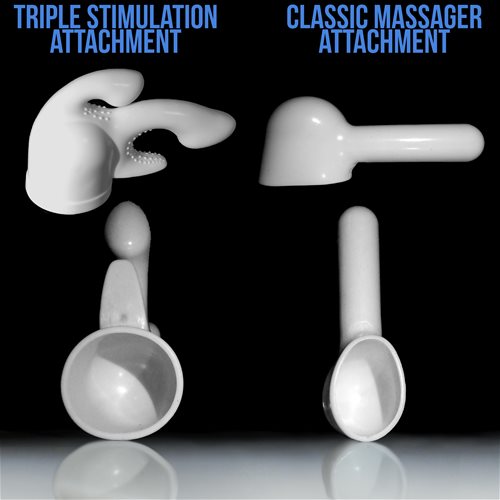 When I first looked at this toy on the site, I thought that it was the same size as the Eden Elements Triple Stimulation Attachment. However, once it arrived in the mail, I saw that I was mistaken. The Classic Massager Attachment is significantly smaller. I worried that the attachment wouldn’t fit on the 2.4” head of my Magic Wand Rechargeable. However, the attachment cup that covers the wand head is quite flexible, allowing it to stretch. After a bit of a struggle, I finally pulled the flexible attachment over the head of the wand, much like pulling a tight swim cap over the head of a large swimmer. Similarly-sized or slightly smaller wands would also be compatible with this attachment.

Once seated, the attachment cup does not fully cover the head of my Magic Wand Rechargeable. However, since the fit is so snug, there is no chance of this attachment accidentally vibrating off the wand head. In fact, I did not find any issue with the fit of this toy on my wand other than the initial effort to apply the attachment.

It took a bit of wiggling and pulling to remove the attachment from the wand. However, the material was sturdy enough that the rough handling did not damage the attachment.

This attachment is very easy to care for. After using the toy, I simply wiggle it off my wand and wash it with soap and water. Sometimes I use toy wipes when I am in a rush. When using an attachment, I don’t have to worry about cleaning the wand itself, which is very convenient. 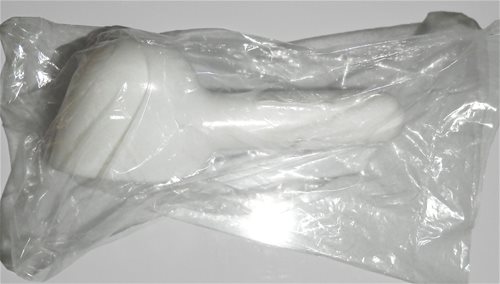 The attachment came in a plastic bag, which was adequate. The cup of the attachment was a bit squished during transport and now maintains an oval shape weeks after it was removed from the packaging. However, this is not a problem since the cup stretches over my wand with ease. There were no instructions to accompany this toy, nor were any needed.

My Dom and I hadn’t played in a while, so I had much pent-up sexual energy. I pulled the attachment over the head of my wand and I was ready for playtime to begin! I quickly turned the vibrator on to the first vibration setting. I rushed to insert the attachment into my pussy without any lubrication, thinking that the shaft was so skinny that no lube was needed. I realized my mistake when I was met with resistance. Still eager to bring myself pleasure, I started massaging my pussy lips. It felt good, almost like a finger slowly massaging and warming up my body. I slipped the attachment tip over my clitoris and felt the concentrated vibrations bombard my clit. Unlike the distributed vibrations that a broad wand head would deliver, this attachment tip made the vibrations very intense.

Finally, I was wet enough to slip the wand into my pussy to the hilt. I did not feel especially full or stuffed, but I definitely felt the vibrations massaging my insides. I slowly inched up the vibration intensity to the second highest setting. However, I soon realized that I was missing clitoral stimulation. I manually massaged my clit, rubbing it between my finger and the massager head, but it still wasn’t enough. That’s when I decided to flip the wand upside-down so the top of the head stimulated my clit while the attachment kept the toy firmly rooted inside my pussy. This felt incredibly decadent, but I knew that I had not exhausted all the toy’s uses. As I started pulling the toy out, I curved the wand up so the attachment prodded my G-spot. Wow, did that feel good! Simply massaging back and forth over my G-spot made the pleasure build to a whole other level.

Before I orgasmed, pulled the toy completely from my body, turned it off, and applied a dab of water-based lube. I pushed the attachment against my back entrance, enjoying the feel of the flexible material against my rosebud. I tried to avoid using my hands since I didn’t want lube all over them. However, the attachment kept bending and evading entering my asshole. Finally, I held the shaft in place and pushed back against the toy. It slowly entered my butt, the slick surface of the toy providing nothing but pleasurable sensations. Right when I got settled into the position, my Dom told me to turn on and turn up the vibrations. As the speed increased, the toy got louder. It got so loud that I had to stand up from my reclined position to avoid the vibrations against my box-spring mattress. I thrust the toy in and out, enjoying the look on my Dom’s face as he watched me pound my ass. I’ll leave the rest of my experience to your imagination, but let me tell you, there were multiple, wonderful orgasms involved!

Eden Elements dual stimulation attachment
$14.99
This product was provided free of charge to the reviewer. This review is in compliance with the FTC guidelines.