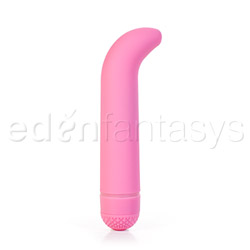 First Timers- Don't Fall For This One!

First timer's beware, the name of this toy may try to lead you in by making you think it will be ideal for someone looking for their g-spot or to just try a fun new toy, but the lack of power and quality will make it a fail for almost anyone.
Pros:
Waterproof
Cons:
Loud
Weak
Quality-control issues
Rating by reviewer:
1
extremely useful review
Granted, I'm a long way past my first time, but I still appreciate discretion. The First Time Mini-G comes in a clear plastic package with the toy as the main display. In the background is a partially clothed woman and the name of the toy and Cal Exotics label on the front. In short, if you really value your privacy about anyone guessing what you bought (especially as many first timer's don't live alone!), you will have to be very careful about opening and disposing of the packaging.

What I do like about the First Time is the material. Plastic is universally friendly. It is hypo-allergenic, phthalate and latex-free. It can be used with any type of lubricant, and is only slightly porous, so it rates pretty well on the safety scale. And what I really, really like is the soft-touch coating which makes the plastic feel velvety soft. On dry skin it glides smoothly (my nipples love it), but as you head down south a little extra lube goes a long way as it will tend to catch more than regular plastic on semi-moist areas. So I would have been decently excited in the choice of material- if they hadn't left a huge seam running right down the middle of the toy. Not only is there a seam, which normally doesn't bother me too much, but it came with a gouge where it didn't seem to fit together well.

The design is pretty typical for a g-spot toy, and I guess the slimness is what is supposed to make it good for newbies. Basically, you have a straight toy with no texture anywhere, that curves at the neck into a bottle-nose dolphin shape. It's a good size curve, about a full 45°, which is perfect for angling up towards that g-spot- but annoying for those who can't stand pin-point pressure against it, or tend to feel like many toys snag the pubic bone. I didn't find fault with this, but at a measly 4 ½” of insertable length and a 1” diameter, though maybe it's meant to not intimidate, for me it just made it pretty boring.

But those weren't the only the cons for me. Especially since this doesn't leave much room to hold onto the end of, with the control being the twist cap at the base. I prefer a bit more of a handle on my toys, and I did find myself accidentally adjusting the setting when I was using it. Further, with the perfectly round shape shaft, the toy tends to get twisted to the side and it's hard to figure out which way to turn it to get it back without taking it out and readjusting it. The only good thing about the control is that it is a textured cap, so it doesn't make it a bit easier to grip.

Now I will concede that, sure, some people won't mind the smaller size, and of course, maybe not all of them have a gouge in the seam, but I'm not sure if anyone is going to want to look past the complete lack of power. Especially since it sounds like it should be powerful! This toy is louder than my husband's electric razor, yet the vibrations were so diffuse that they didn't pack a punch no matter how I tried to use it. I can't complain they were buzzy, but they were just completely underwhelming.

First I tried it on my clit, but that was a complete fail. It just ended up making me feel like I needed something that would actually do the trick. Then I tried inserting it. It did hit my g-spot, but I hate that the shaft was straight rather than curved, as I couldn't stroke it with quite as much pressure as I like. And of course, the vibrations felt weak, and like they were just “there”, rather than feeling like they were stimulating me.

The only thing that I felt this delivered on was its being waterproof. Used it in shower with no issues and have successfully submerged to clean with no wet batteries.

I still suggest removing the batteries prior to cleaning with soap and water or toy cleaner, and storing in a plastic bag or toy pouch. It's not a lint-collector, but it is a bit more hygienic. And by storing without the batteries, you will extend battery life and prevent accidental corrosion.
Follow-up commentary   I still don't like it 2 months after original review
This vibe really did nothing for me, and I've since given it away. But even my friend found it useless. It's not so much a quality issue; it's a design issue. There are just better options.
This product was provided free of charge to the reviewer. This review is in compliance with the FTC guidelines.