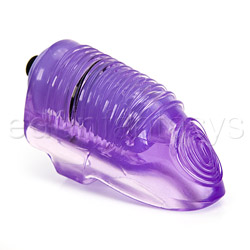 Finger massager
by Church and Dwight

Although this toy seemed like it was going to be an exciting experience as a beginner, it still fell extremely short of my expectations.
Pros
Comes with a condom, comes with storage pouch, quiet, partner play
Cons
WEAK, weak vibrations, only lasts for 30 mins
Rating by reviewer:
2
useful review

The design of this toy allows for anyone to use it, small or large hands. It's comfortable on your finger even if it's on there longer than the 30 minutes that the battery lasts for. The tapered shape of it allows for it to be slipped in with ease. The squishy material also feels really good. This toy is so small you could fit it in your purse and take it with you anywhere.

This fell short of my expectations. I was expecting the vibrations to blow my socks off, but that just didn't happen. Having never used any sort of toy before, I thought it would feel amazing. There is only one function for vibration, and it only lasts for 30 minutes. Not that it really matters, because the vibrations are so subtle that you notice the ribs more. I wouldn't use this by myself because it just wouldn't finish the job for me.

After we used this toy I took out the bullet and washed the silicone with soap and water, dried it all off, and put it back in the pouch.

I used this toy with my boyfriend of two years so we could do something different than what we normally do. It's a great toy for foreplay, but that's pretty much about it. I've never used toys before so I was a little hesitant to get this, but my boyfriend seemed to be excited about the idea. When he ripped open the package, and slipped it in I was expecting to be blown away from the feeling of the vibrations, and honestly I was kind of disappointed that I could barely feel them. Maybe if the vibrations pulsed or did something else it would have been more of what I was expecting. I mostly just felt the ribs on this toy, so it could be used with the vibration turned on or off. This toy is also EXTREMELY quiet. We live in an apartment with paper thin doors, and were worried our roommates would hear the buzz of it, but it wasn't an issue at all. Overall it's an okay toy, but it's not something I would use by myself.
This content is the opinion of the submitting contributor and is not endorsed by EdenFantasys.com