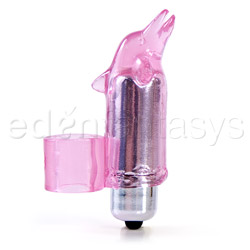 This toy is not intended to be the be all end all of finger vibrators. It's not supposed to get you off all on its own. It is supposed to tease you and bring you close without letting you finish. For the price, you really can't go wrong.
Pros:
Great price, Phthalate free, Great for beginners, Good tease.
Cons:
Vibrations aren't as strong as they could be, Won't be a long lasting toy, Batteries harder to find.
Rating by reviewer:
4
extremely useful review

The Dolphin teaser is meant to do just that, tease. If you happen to be sensitive enough that the vibrations from this alone are enough to get you off, then kudos to you! But for most this little dolphin will do little more than start to work you up, which is the idea.

On its own a female or male can stimulate smaller areas such as the clitoris or nipples. The dolphin is not intended for insertion, but being waterproof, there are realistically much worse things you could be inserting into your vagina. Use it to stimulate the man's penis or scrotum while giving head or a hand job. You could use the dolphin to stimulate either partner during intercourse.

Due to the lower level of vibrations, this toy would work best for beginners unsure of whether or not they will like the extra vibrations, although advanced users can enjoy it as well.

The dolphin is made of a smooth TPR, which makes it phthalate free. It has the slightest drag to it when running your finger across it and is otherwise completely smooth except for the nubs that make up the fins and the dolphin's nose, and the ring that goes around your finger. There wasn't any real noticeable smell or taste that I found.

The smoothness doesn't add anything extra as far as stimulation goes.

Its material also makes the dolphin somewhat of a lint magnet, so keep that in mind when contemplating storage.

The dolphin is shaped like, well, a dolphin. Except this dolphin is a lovely shade of pink. The same company also makes this in a purple bunny version as well as a blue nubby version.

The dolphin is about 3" long from nose to back end. The bullet is about the same length as the dolphin's shell, but when inserted sticks out about 1/2" or so.

The ring is made to be able to accommodate a wide variety of fingers, and in my experience with it, it will. It fit my dainty fingers without falling off as well as my fiance's giant fingers without being too tight.

This toy will travel fairly well. As far as being discreet, yes and no. A small child might not know that this is supposed to be a sex toy, but pretty much any adult that stumbles upon it will be able to figure it out fairly quickly.

The bullet runs on 3 AG 13 batteries that are included in the packaging. There are instructions on the back for which direction to put them in.

The vibrations can be felt the most everywhere the bullet hits, which one would expect. The vibrations don't travel through solid hunks of the material very well, so they are somewhat weaker when they finally reach the tip of the dolphin's nose.

The bullet itself is easy to turn on and off by just pressing the on/off button located at the base. While in use the button is pretty difficult to accidentally turn off, which is always a good thing, however sometimes it takes me a few times to get it to stay on. This really isn't a big deal, just something I noticed.

The noise level of the toy actually surprised me a bit, I thought it would be louder. Outside of the dolphin shell the bullet is as loud as a really loud vibration on a cell phone. You would be able to hear it from across the room, but behind a closed door, under blankets, with the TV on, no way. Inside the shell it's even quieter, comparable to a more mild cell phone vibration.

The vibrations are more of the high pitched buzzy variety and of a low to medium intensity.

This dolphin has held up well in the shower and to being held under water, with no water getting into the battery compartment.

Care and maintenance is simple, just remove the bullet, and wash with warm soapy water or spray down with your favorite toy cleaner. I've been able to dry it with a clean towel without any real problems, but your best bet is to let it air dry.

You can use this toy with either a water based or silicone based lube for an added gliding sensation during use.

Store your dolphin in something, whether it be the original packaging or just a ziploc bag. But the material will pick up lots of dust and lint, so I wouldn't leave it out on its own. Also be sure to store this toy on its own if you pick a bag, because hanging out with other toys of the same materials can cause them all to melt.

The back says basically the same thing, as well as showing pictures of the three varieties of this toy offered from the company. It tells you what kind of batteries you use, and shows you how to insert them.

Personally, this toy wasn't quite enough for me. It was enough to work me up, but not enough to take me over the edge. But being called a teaser, I wasn't expecting it to.

I used it a few times on my own as well as with my fiance during sex and in the end I always ended up switching to something else. I also find that the vibrations start to tickle my fingers after a while. My fiance noticed this too. This knocked out my suggestion of getting 10 to wear for back massages.

Overall for the price and based on the intended purpose, I think this is a great toy and great for just about anybody. It probably won't last tremendously long, but its price makes that point not the hugest of deals.

Finger fun
$16.99
Follow-up commentary   I don't like it anymore 5 months after original review
Honestly, I was never that fond of this guy to begin with. He looks cute, but it's such a pain to get the bullet in and out to clean the sleeve that I've pretty much given up on this toy. I'm keeping the bullet until it dies, but after being used a total of 35-45 minutes, it still seems to be going pretty well.
This content is the opinion of the submitting contributor and is not endorsed by EdenFantasys.com

Reviewed by Jul!a (Eden Writer) To the critics who despise us, go ahead and criticize us. It's your tyranny that drives us, adding fire to the flame.
Rank
7.5
wrote 560 reviews
Comments
Make a post
Forum
Thank you for viewing Dolphin teaser – finger massager review page!
Top