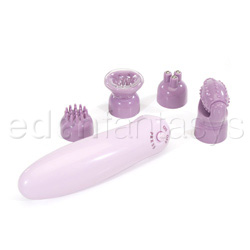 In all fairness, this toy and its attachments are well suited for tired or aching muscles after some "heavy activity." I did use it on my neck and shoulders, and it felt rather nice and I'm sure it would work well on the lower back as well.
Rating by reviewer:
1
useful review
&nbsp;A nice play on words is one of the few positive things I can say about Four Play Massager Kit. As the name implies, the vibrator does come with four interchangeable attachments that have the potential to make play time interesting. Upon opening the package and removing the main unit, the four attachments were packaged in a separate plastic bag. Depending on how big your toy drawer is, they could be misplaced easily; a small storage pouch included with the unit would have been a big plus.

&nbsp;Of the four attachments, three are made of hard plastic, and the fourth has a silicone sleeve over it which does soften things up quite a bit. The main unit uses two AA batteries, which are simple to insert. Operation is a simple on/off button and it is located in a location that actually makes sense. I was impressed with the motor in this toy, and would rate it at a strong four on the Vroom scale.

&nbsp;The first attachment reminded me of a diffuser for my hair dryer, only in miniature form. The idea of the vibrations passing through the points of the attachment sounds good in theory, but in practice, the hard plastic did not make for an enjoyable sensation. Next came the rounded magnetic massager attachment. I&rsquo;m not really sure what the point of this attachment was, but the thought of magnets made me feel like a refrigerator with pictures hanging off of it; no thanks! The studded roller attachment was not much of a stud, and gets very noisy when not pressed against skin. The suction cup attachment was the most comfortable of the four and did slide smoothly. However, the ticklers were short and did more for teasing than pleasing.

&nbsp;The sound level of the vibrator (stud roller aside) is at a moderate three bees. In all fairness, this toy and its attachments are well suited for tired or aching muscles after some &ldquo;heavy activity.&rdquo; I did use it on my neck and shoulders, and it felt rather nice and I&rsquo;m sure it would work well on the lower back as well. Overall, the four play rates one out of five stars based on the fact that its strong motor makes it a good massager.
Follow-up commentary 13 months after original review
The massage kit has proven itself useful on working out knots and loosening tight muscles. My opinion remains the same on this toy, it works well on sore muscles but it misses the mark as a personal massager.
This product was provided free of charge to the reviewer. This review is in compliance with the FTC guidelines.