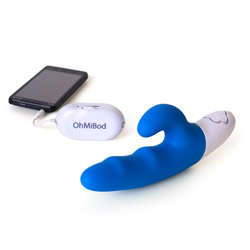 While I can appreciate the technology and unique musical experience the Freestyle W has to offer, I feel like the basics of shape and design were thrown out of the window here. The Freestyle W's "waves" did not offer any stimulation other than uncomfortable pressure, this includes the clitoral attachment that had me sore for the rest of the night after using it. Pair this with only moderate vibrations and no orgasms and you can have an idea of how disappointed I am with my purchase.
Pros:
Responsive to music, rechargeable, pretty?
Cons:
Moderate vibrations, awkward clitoral attachment placement, not waterproof, shape/size
Rating by reviewer:
2
extremely useful review

In the middle of hurricane Irene with no electricity for 3 days, and a full charge on my Freestyle W, I had plenty of opportunities to ride its waves. For the money I spent, I was expecting these waves to sweep me away on a musical escapade of pleasure and the plunger breaking wave of a clitoral attachment to bring me all the way to shore. Unfortunately, these waves left me sore and stranded on an orgasmless island.

No matter how I maneuvered this toy around, I could NOT orgasm!

The Freestyle W is made of silicone (the body), and plastic (the handle and control pad.) The silicone is not only beautiful, but body safe, as well. It is always noteworthy to mention that silicone is only compatible with water-based lubricant.

This silicone also attracts hair and lint like its nobody's business, but this should not be much of a problem as long as you use the nice satin pouch included in the box. The material has very little give to it, and I found that the clitoral attachment does not really "want" to be adjusted at all. There is a lot of pull on the clitoral attachment thus; it will make its way to its original shape very quickly and easily during use.

The silicone itself has a very smooth, velvety texture with no odor or taste whatsoever.

OhMiBod designed the Freestyle W to resemble waves. The design offers two "waves" for texture as well as the clitoral attachment that looks like a big plunging breaker wave. The waves on the shaft were extremely uncomfortable for me vaginally and anally. There is something about them that catches my insides wrong and causes uncomfortable pressure. These waves are not like texture that creates pleasurable friction, they are hard and sort of force the inside of your vagina/ass to conform to this shape. I feel like if the waves were not so hard. They would have been much more enjoyable instead of painful.

The clitoral attachment is really oddly placed. When fully inserted, there is so much pressure pushing down on me. The attachment seriously hurt my girly pearl! I was sore until the next day. This time I tried to use it without the shaft being fully inserted, which presented another problem... I do not know about anyone else, but my clitoris is not 1/3" away from my vagina. So I had to put a lot of effort into pulling the attachment up, so I could get stimulation from it, just to have it spring back into its original position 2 seconds later.

The design is pretty. I'll give it that, but, it is not functional and does not work with my anatomy well... at all!

There are two bullets, one in the clitoral attachment and one in the tip of the shaft. I found that the vibrations are much stronger in the shaft than in the clitoral attachment and the vibrations overall are moderate at best. The vibrations are also loud. You will hear these through a blanket and a closed door if you do not turn the tv/radio on! These bullets are controlled simultaneously by a flower shaped control pad on the base. One thing I honestly like about this vibrator is the control pad. It works extremely well, and it is upside-down, so when inserted it is actually right-side up for the user.

There are 5 buttons on the control pad:

2. Up arrow - Increases vibration intensity and cycles through patterns.

3. Down arrow - Decreases vibration intensity and cycles back through patterns.

Luckily there is a non-music function with steady vibrations in 3 intensities (low, medium, and high) and 4 patterns:

I loved the patterns, but the vibrations overall are lacking in the intensity department.

Battery life lasted about 3 hours before I noticed the vibrations weakening.

I have cleaned this toy with a mild soap and warm water after every use. Eventhough, this is a silicone toy, you can not fully submerge it to boil for sterilization due to the fact that the toy is only splash proof.

The toy can be stored in either the satin pouch included, or the box it came in.

The packaging is a very thick and durable cardboard box with a plastic insert on the inside that holds all of the contents. 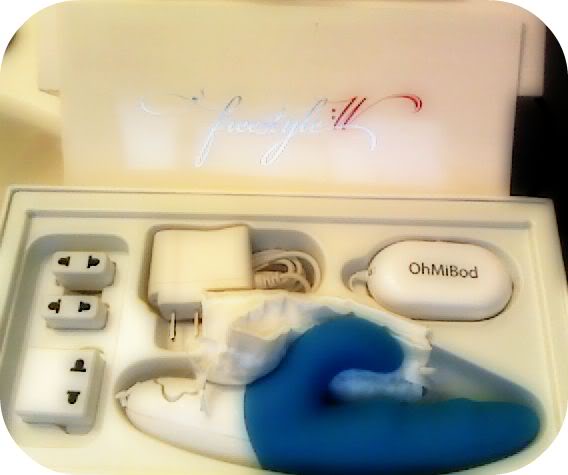 I had a tremendously hard time writing this review. I've tried my best to be fair, but I just cannot put into words how disappointed I am with this purchase. I spent a considerable amount of money on this vibrator, and even more time and effort was put into trying to make it work for me. In all honesty, I have a $30.00 rabbit that does a better job than the Freestyle W. It is truly sad because, I wanted so much to like this toy.
This product was provided at a discounted price in exchange for an unbiased review. This review is in compliance with the FTC guidelines.