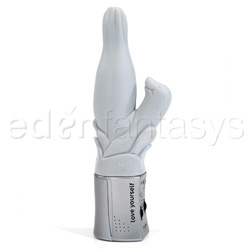 I was previously wowed by Fun Factory's Corsar, a smallish silicone g-spot vibe with a good variety of vibration settings. Sally Seal certainly excels when it comes to presentation, just as Corsar did; she's adorable, and she comes in a nice box that includes an instructional booklet and packet of lube.

Usually, when a toy takes four AAs, you can expect a good amount of power. Sally Seal has power, sure, but it's less than I expected from four AAs. I quickly ended up with both the twist and shake settings (rotation and vibration) on high, leaving me nowhere to go when my orgasm was approaching. The rotation of the tail also wasn't as powerful as I had hoped, and while the tail felt pleasant going in, the beads in the shaft were depressingly imperceptible.

Additionally, this vibe makes some unsettling sounds. The twist setting sounds weak, as though it is working to churn out every rotation. This phenomenon seems only to worsen the further the vibe goes inside the vagina. The batteries also rattle in their chamber, making the power button rattle as well. To be fair, Sally isn't horrendously loud, but I'd rather her be louder if it meant more power.

The spinning wheels that control the vibration and rotation are an interesting touch. I always flicked them until they stopped, so I didn't have much trouble with them, but others might hate the sensitivity and placement of them.