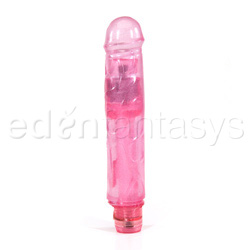 Glitz but no glam!

The waterproof jelly penis is made from, obviously, jelly! Jelly is a naturally porous material, which means your toy can harbor many nasty bacteria if not cared for properly. Many people are sensitive to jelly, so I would definitely advise you to try a much cheaper jelly product just to see how you react to the material.

The Waterproof Jelly Penis is phthalate free. It is stated on the front and back of the package. Even though the product is phthalate free, you should still use a condom with the toy. Jelly is only ranked a 2 on the safety scale.

If you don't know what phthalate, is you can learn about them here: Phthalate

Basically, they are toxins that you don't want to put into your body.

I do not love the design of this product. It it very deceiving, like I mentioned before, because the ridges you see on the shaft are minimal to where they don't even play a part in the toy. They are only there for aesthetic reasons, just like the glitter. The shape is pretty realistic. I mean, it looks like a penis, it just doesn't have the texture or feeling of a real penis.

The size is great. I would not recommend this to people who need a lot of girth. The shaft is average size. Not too big, not too small, just average. Since the penis is not flexible, it is hard to reach your g-spot, but still possible. When you do hit your g-spot, it may be a little uncomfortable for you. The head of the penis is thick, so pinpointing stimulation to your clit or any other areas of your lady parts is almost impossible.

The measurements are as follows: 6.5" Long, 1.5" Wide, 4.5" Circumference, and it's 6' insertable. If you look very closely at the shaft, the top 3' are wider then the bottom half. Since the toy is only 6 inches long, it does make it harder to hold and thrust with the toy. If it were a little longer it would be more functionable. 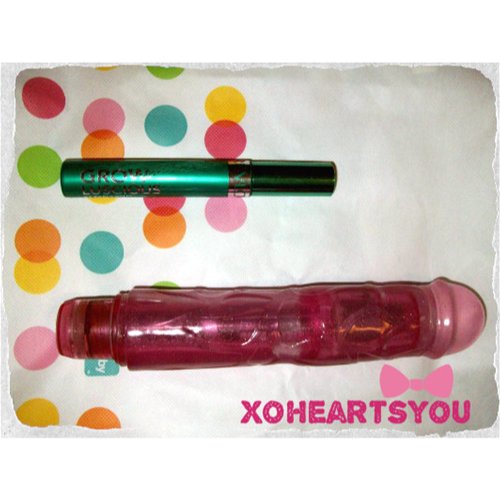 The controls on this vibrator are located on the very bottom of the battery cap. All you do is turn the wheel to the setting that fits your needs. To turn it off, just bring the wheel back to the starting point. You can easily change the setting of toy when in full action. There are 5 settings to the toy. You can't always tell the difference between the settings, but they range from 2 bees to the 5th setting, which I have actually found to numb me, but it doesn't numb your fingers. The vibrations of all the settings are a buzzing vibration.

For the vibration noises check out my video!

I have also found that if you use settings 3-5 for more then 2 minutes, the battery cap actually comes undone. The battery cap is very easy to put on and take off, but since the cap has fallen off multiple times on me I refuse to use it in the shower. This is a disappointment to me since I loved the idea of it being waterproof.

The sound of this toy is loud. It is louder then I like. Definitely can't be used with someone in the other room. The sound actually seems to get louder when the toy is inside of you. This is extremely annoying.

When caring for a jelly toy, you need to make sure that you clean it properly or you can get a bad infection since the jelly material is porous. Clean your toy with warm water and gentle soap. Using a heavy soap can damage your toy. The safest way to avoid bacteria is by using the toy with a condom and storing in a dry, cool area.

As of right now I store my toy in the package it came in. Even though it is pretty big, I keep it covered for my protection. Make it a habit to clean your toy before and after use. You cannot disinfect this toy to share or use in a different orifice due to the type of material, you will just completely destroy your new toy. I have also had no issues with lint or dust sticking to the product.

Water based lubricates usually run cheaper in price, but this toy is compatible with all lubes.
You do not need alot of lubricant with this product if your good and ready for penetration. To be honest with you I didn't use a lube the first time around and the penetration was smooth. If you are good and wet you really don't need lube but always keep it around in-case you dry up.

NEVER sterilize or boil this product.

The packaging of this product displays the vibrator as the main feature, and has an image of a female in a sheer black bikini. The package also clearly states the product is waterproof and phthalate free. When you turn the package over it gives you the dimensions of the toy, which is 6.5". The package did include directions, which you really don't need since they toy is extremely basic. The instructions basically just told you how to insert the batteries. The package is not one I would wrap and give as a gift, but would be okay placed in a gift bag. I do use the package to keep my toy stored in. Even though the package is pretty big, I just prefer it in its original case. 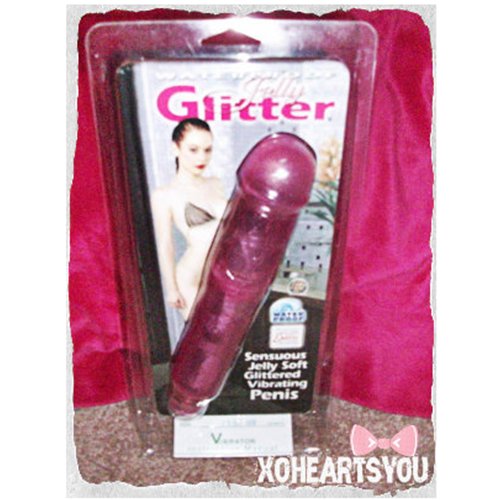 I have learned to love my toy!

When I received my package I immediately cleaned and put the toy to use. The first time I used the toy the vibrations were seriously strong. Over the past couple of days I have learned what settings I need to use and when to use them. Now the vibrations are not as strong, and you totally get used to the noise and the power. The only thing I dislike about this toy is that the seal on the battery cap allows water to get into the compartment just during a simple cleaning. I refuse to take this thing into the shower.
Follow-up commentary   I don't like it anymore 22 days after original review
Today I went to go use my toy and was disappointed to see that it would not start. I unscrewed the base where the batteries are located noticed more rust had grown on metal. I took out the batteries then replaced them to find that my vibe now only had 1 speed and that was high. I mentioned in my review about the rust forming almost immediately after cleaning. Due to that reason, I never got to enjoy this toy in the shower. If you are going to buy this toy just know that you will not be able to bring it in the shower with you; this vibe is NOT waterproof. So, now, my vibe lays in the garbage.

**RIP: waterproof jelly glitter penis.**
This product was provided free of charge to the reviewer. This review is in compliance with the FTC guidelines.