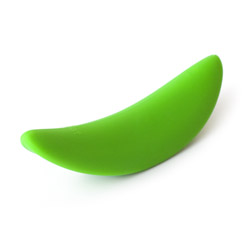 Touch is great for pinpoint stimulation packed with power. It can also be used for broader stimulation. There are multiple speeds, it's quiet and water proof which makes it great for any user. It's cute and made of body safe silicone.
Pros:
Multiple speeds
Waterproof
Powerful
Quiet
Cons:
None
Rating by reviewer:
5
extremely useful review

Touch is a cute, discreet, powerful, waterproof vibrator by Leaf. You can use it alone or with your partner, letting them control it, or put it between your bodies during sex to get external vaginal stimulation. It's waterproof and safe to take into the bath or shower. It is meant for external stimulation and that's all I recommend using it for. You can get pinpoint stimulation from either end, or broader stimulation by laying it directly over the vagina. Use it on nipples, or incorporate it into oral sex by using it on your male partner's genitals. Touch is great for any user.

Touch is made of 100% body safe silicone. The silicone is soft and velvety with a good bit of drag. You may prefer to use a water based lubricant when using this toy. There are no textures. It looks like it would be flexible, but it isn't. The very end of the tips and plushy, but the rest of the toy is pretty solid with no give. There are visible words and a seam but they don't cause any discomfort for distraction. There wasn't any noticeable scent to it.

Touch is obviously designed to look like a leaf, and it does. It reminds me of the leaves you would see on a flower. It also looks like a long, thick blade of grass. The shape makes it easy to hold in the palm of your hand, a couple fingers across the top, flat part of the vibe. The two pointed ends are great for pinpoint stimulation, where the bottom is good for broader stimulation. The size and shape are decent for any user. It isn't meant to be inserted. The size makes it easy to travel, and while being discreet, it would be questionable why there's a button on it. It is 5" long with a circumference of 3 1/2" and a diameter of 1".

With the Life by Leaf 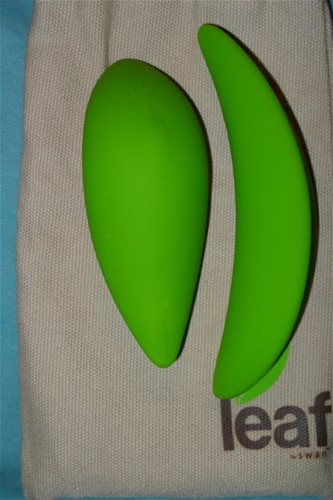 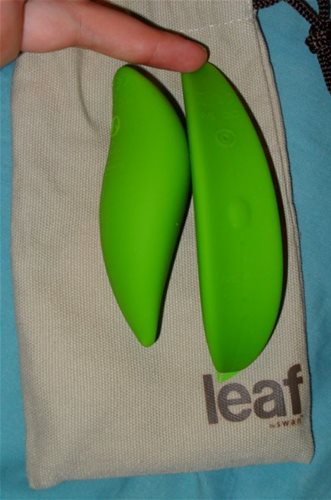 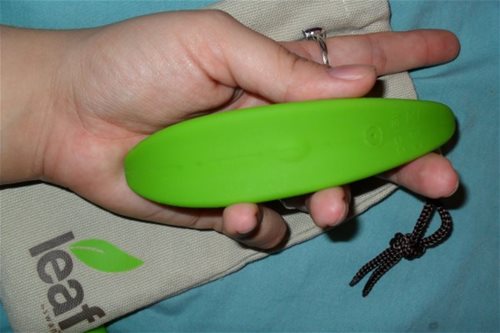 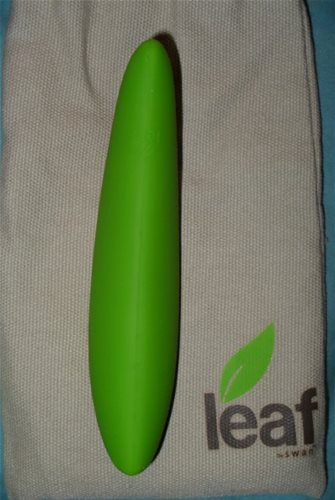 Touch is rechargeable. There is a charging port located below the button, on the top, flat part. It can take up to 3 hours to charge, but mine only took about 2 to fully charge. A red LED light will come on while it's charging and turn off when finished.

This toy is pretty simple to operate since it only has one button. You simply press the button located above the charging port and hold down until you reach your desired speed. There are no patterns. To turn it off just press the button and release. If you want to slow it down, you have to turn it off and start from the beginning. The vibrations and deep and buzzy and can be felt throughout the entire vibe, so it can make your hand feel buzzy. The vibrations are the strongest near the broader end, but can also be felt at the thinner end as well, making it great for pinpoint stimulation. You can use either tip or hold it so the curve on the underside sort of "cups" the vagina for broader stimulation. Do to the longer shape of this vibe in the Leaf line, it is good to use during sex. I can just lay is down so it's cupping me and between our bodies, sort of held in place (of course it can slip and need re-adjusted). For as much power as it has it is pretty quiet! You won't hear it outside of a closed door.

It is a travel lock feature to avoid accidental embarrassments. To lock it, press the button 3 times very quickly. The first press will cause the toy to start, pressing it two move times will lock. It may take a few tries to get it locked. Press the button quickly 3 times to unlock it. A light will come on for a couple seconds both when the toy is locked and when the toy is unlocked.

It's completely waterproof and holds up in the bath or shower.

You should only user water based lubricant with Touch. Antibacterial soap and water will get it clean, but you can also use toy cleaner or wipes. The box can be used for storage or it comes with a nice drawstring bag to keep it that can fit the toy and the charger. You can also store the bag and charger in the box, which has a magnetic closure. You will want to keep in the bag or box (or box) after use because it does pick up hairs, lint and other particle very easily.

Touch comes with the charger, bag and manual. The box is tasteful but not that discreet. It has a magnetic side closure. The box can be used for storing, or it's nice enough to keep around for other things to stash in it. The manual has information for a 1 year warranty.

This is the second Leaf vibe I have and I really like it. I chose it because Life wasn't working out that well during sex and I figured the longer length of Touch would be better, and it was. It nestles closely to me when my guy's body is pressed against mine. The ends are great for pinpoint stimulation. It has the power that I love, though just slightly under Tango, Salsa and Mimi. I would put Touch and Life in my favorites list for sure.
This content is the opinion of the submitting contributor and is not endorsed by EdenFantasys.com