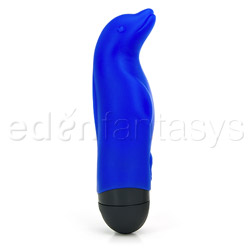 I'm kidding about that title, but it seems to me that the link between dolphins and sexuality isn't far off the mark. I have a lot of luck with dolphin-shaped toys, and the Little Dolly is the best one yet! Bath time was never so much fun!
Pros:
Waterproof, Fair vibration, Quiet, Adorable
Cons:
Shape can be awkward to insert, G-spot pressure could be firmer, OH GOD THE LINT!
Rating by reviewer:
5
extremely useful review
Maybe the rumors are true, and dolphins ARE attempting to take over the world. This time they've resorted to having us model sex toys after them - and the results are tipping in the dolphins' favor!

The neck of the dolphin curves slightly so that the nose will bump against your G-spot, though the pressure may not be firm enough for some, and a bit of creative angling might be required, as the shape and size of the Little Dolly's body might make insertion of anything past the neck to be difficult (in my case, pretty much impossible). But once you get the positioning right, you should be set to have a lot of fun!

The controls are located at the base of the toy (suspiciously, right where the dolphin's own "equipment" would be if it were real), and consist of two buttons: a plus and a minus. Pressing the plus button once turns Dolly on, and holding down/pressing a few more times ups the speed of the vibration. Once you're at the top speed for steady vibration, further presses will cycle through three different "pulsing" speeds. To get back to steady vibration, press the minus button, and hold or press a few more times to turn the speed down. At the lowest speed, pressing the minus button turns the toy off. While it sounds like quite an awkward affair, once you actually get the toy in your hands and fiddle around with it a bit, it will become a lot simpler. Instructions are included, so refer to them if you get lost. (A sample packet of lube is also included, so that's awesome. Who's gonna argue with free lube? Water-based for this toy, of course.)

The toy runs on two AAA batteries. WARNING: as per the instructions, this toy is only waterproof when the indented lines on the battery pack line up. If they don't, you can still turn the toy on and use it, but you cannot take it into the shower or tub. So if you like your fun to happen in the water, make sure the cap is lined up properly first. Fun Factory also recommends opening the battery pack when you're done in the tub to let any nooks and crannies around the base of the lid dry out (don't worry - the batteries themselves stay quite dry and no water gets near them).

As for the vibrations themselves, they're pretty decent. Combined with a rocking, swiveling, or gentle tugging motion (emphasis on the "gentle" for that one, else you might tug your pubic bone too hard), this toy feels downright amazing. It also works very well as a clitoral stimulator, though once everything's over and done with, that cute little smile almost seems like a smirk. I made sure to douse its head in toy cleaner quite thoroughly to teach it not to be so smug. On that topic, cleaning also be done with soap & water or bleaching (make sure the lid is "waterproof" closed!) Because the battery pack is plastic, I wouldn't recommend boiling it. Using the dishwasher may be alright, but exercise caution. Also, this toy is also a lint MAGNET. It managed to catch dust and random hairs during the two-second walk from my bathroom sink to my toy box in the bedroom, so be sure to rinse off before playing.

And be sure to lock it up at night. Don't want to help that world domination plot along, do we?
Experience
Ladies and gentlemen: I give you the toy that gave me my first G-spot orgasm! *confetti* Quite a learning experience. Clitorally, I can often achieve orgasm in under five minutes (sometimes as quick as thirty seconds). Little Dolly kept me busy for almost an hour. It was the first time I'd experienced that mixture of fun and frustration, and I gotta say, I'll happily go through it many more times in the future.

I just wish it didn't collect so much lint. Seriously, I thought that the Silk was bad, but this baby... Dear lord! Though, to be fair, my house is quite a mess, so perhaps I should expect it.
Follow-up commentary   I still like it 4 months after original review
It occurs to me now that putting a motorized toy in the dishwasher might not be the wisest thing to do, so disregard that suggestion in the original review. And feel free to imagine smacking me in the back of the head for not looking into it sooner.

The Little Dolly is still a great toy. It doesn't get used a whole lot lately, but it performs like a champ every time I do pull it out. A superb offering from Fun Factory, and an excellent introduction to the company's toys.
This content is the opinion of the submitting contributor and is not endorsed by EdenFantasys.com

My Little Dolly tags
About author