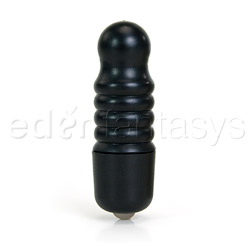 Great while it lasted :(

I would recommend this toy only if you don't mind spending more money in a few months to replace it. It ended up malfunctioning on us, with only a few settings that worked and eventually stopped working altogether. Would not be powerful enough for more experienced users that require a lot of vroom!
Pros:
Easy to store
Easy to clean
Good vibrations
Couples or solo
Cons:
Broke
Hard to push button
Settings stopped working
Rating by reviewer:
2
useful review

This bullet is good for solo or couple use. It fits into most standard size cock rings that hold bullets, which is what we used it for. We used it for clitoral stimulation during intercourse and foreplay.

This bullet is made with a dull finished plastic that almost appears to be rubber. It does trap in the odor of your cleaning product, which isn't necessarily a bad thing. It is hard and has grooves near the center. There is a seam in the middle of the bullet where you change the batteries but it is not noticeable during use.

This bullet is a little over 2 inches long with the girth about the size of a dime. The bullet is the perfect length for holding against the clitoris. It is fairly discreet, but I'm sure anyone who came across it and pressed the button would be able to figure out what it is. The size of this bullet is useable for any level of experience. The toy is very easy to hide and would be suitable for travel inside a toiletries bag or kept in its box.

When we first ordered this bullet we were excited about the various settings. All the settings were fun and added a little extra surprise when my fiance would switch them. Unfortunately where the button is placed requires you to stop what you are doing to switch settings. The button was hard to press since we got it. A few times it even went flying, slippery from lube, as we tried to press it. After a few months of using it regularly inside our butterfly cockring, we noticed that not all the settings were working. We tried replacing the batteries but could still only use the first and last setting. A few weeks after we discovered the settings were malfunctioning, the bullet stopped working all together. We tried changing the batteries again with no luck. When we had the chance to use it while it still worked it was very nice but wouldn't be enough for people who like a lot of vroom. It is somewhat of a battery guzzler because if I remember correctly we had to change the batteries once before it broke down on us. It was fairly quite and waterproof.

This toy is easy to clean and easy to store. We kept it in the box it came in and only used eden fantasy toy wipes to clean it. The battery compartment is easy to twist on and off. It is small and doesn't require much room in the nightstand.

This toy came in a small black box with a fitted red plastic inside. It was very discreet and could simply be wrapped as a gift without needing a larger package. There were no directions in the box but it did come with extra batteries and the box works well for storing the toy.

Overall, we enjoyed this toy while it lasted. I was sad to see it go because we enjoyed using it as the replacement in our bullet cockring. If you are willing to take a chance if you think we may have just received a faulty product, I would say go for it! It was worth it in the beginning aside from the hard to press button.
Follow-up commentary   I still don't like it 17 months after original review
Unfortunately, this toy did not last very long for us. We loved it at first, but once it stopped working, we were unable to fix it. It has since been thrown away.
This content is the opinion of the submitting contributor and is not endorsed by EdenFantasys.com