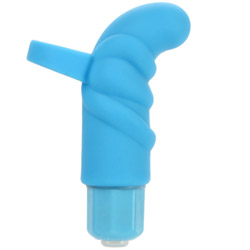 I Got Friends in High Places

Doc Johnson delivers one very high quality finger vibe. Versatile to a T, this bad boy features strong vibrations, a waterproof O-ring, multiple functions, and is usable together or separately. Those major power queens out there will want to pass, or possibly use the bullet without the sleeve, as I do. Otherwise, for you sensitive Sallies, this could be your new best friend!
Pros:
Silicone is sterilizable and lasts forever, bullet is quiet, bullet is strong.
Cons:
Vibrations significantly deadened by sleeve.
Rating by reviewer:
4
extremely useful review

Doc Johnson has just released a lovely new line of colorful bullet vibes equipped with silicone sleeves. These 'finger friends' are meant to be worn on the finger while stimulating any sensitive area with light vibrations. Each toy is waterproof and multifunctional, with 10 different settings.

The removable bullet is much stronger without the sleeve, and can be used at full strength on the nipples, penis, scrotum, or clitoris. It's strong enough to get most users off, but mega power queens may want to look elsewhere. Inside the sleeve, the vibrations are significantly dimmed, and will be best for beginners.

This waterproof vibe is fairly discreet and can surely travel with you anywhere. In the tub, on the go, when you just need some extra stimulation - your Roly Ripples Finger Friend is ready to lend a hand.

This lovely silicone is fairly firm, about a 7 on a scale of 1 - 10, 10 being the most firm silicone I've encountered. This plush silicone is phthalate-, flavor-, and scent-free, boilable, bleachable, and pretty easy to take care of. The only issue I have is that it does attract dust and lint fairly easily. It's certainly not as bad as a toy of TPR or PureSkin, but it does like to hold onto dust bunnies. It's that friendly.

The silicone has a slight drag to its otherwise very smooth texture. Waterbased lubricants will be wonderful to use with this. Silicone lubricants will need to be patch-tested before going all-in, as they may react negatively with the toy and melt it.

The bullet is slick, smooth ABS plastic, and is thick and sturdy. The hard plastic transmits vibrations wonderfully, showcasing its power with every vibration.

This finger friend features a smooth rounded tip, which makes insertion easier (although, still, it will only be shallow) and creates an ergonomic resting place for the curved finger during playtime. The stretchy silicone ring is easy enough to get onto any sized finger, save for the very small ones, in which case you can insert 2 fingers with ease.

The pocket-sized toy is a mere 1" x 2.75" in size, and can go literally wherever you do. Since it's got the waterproof O-ring, you can take it under the sea, in the bath, or wherever. The bullet alone is only about 2" x .75" and is so small it will make you smile. It walks softly but carries a big stick!

For me, this toy is best used without the sleeve. I prefer to hold the little bullet by the button-end and let it unleash its power on my clit. My fingers may get numb after a while, as the entire bullet vibrates with equal intensity, but I don't really mind. The vibrations are a low 4/5 vrooms, and a mere 2 bees. Its buzzy vibrations are moderate to high and fairly quiet.

Inside the sleeve, the strength of vibrations are cut in half and are only good for those with super-sensitive erogenous zones. The hard plastic of the mini-bullet acts quite contrary to the soft silicone, transmitting vibrations like it's its job. And, well... it is.

The push-button on the bottom of the toy is easy enough to use. It features 10 functions - a high, medium, and low steady vibration, followed by 7 pulsating patterns, identical to other Doc Johnson vibrating toys. I like to hit this button once, accessing the highest vibration, and leave it there. I leave the sleeve as a cat toy.

The bullet has not yet been tested in the water, but I don't recommend submerging it. The soft push-button has a slight gap between it and the bullet body, and I have only had bad experiences with submerging waterproof toys. I'd hate to kill a friend! So test this out at your own risk. Showers should be fine, but submerging is probably a no-no.

One issue occurs when removing the bullet from the sleeve - be sure to turn it in a clockwise motion. Otherwise you'll merely succeed in removing the battery case and spilling the 3 enclosed watch batteries on the floor. The bullet is a bit difficult to remove from the sleeve, but if you dab it with some waterbased lube beforehand, you'll do just fine.

Also of note is that you should remove the tiny white paper disc in the battery compartment before attempting to turn this toy on. I didn't realize the batteries were included and thought mine might be defective! Then, 'DOH!' I realized what was up and was happy my finger friend wasn't dead, because the bullet was surprisingly powerful.

As mentioned before, water-based lubes are best with silicone toys. However, if you're hellbent on using your favorite silicone-based lube, be sure to patch test it first.

For everyday cleaning, both the sleeve and the tightly-closed mini bullet can be washed in soap and water. Antibacterial wipes are perfect for cleaning up your mini bullet as well.

I recommend letting the sleeve air dry, then storing it and the bullet separately in case any water has been trapped inside. You'd hate to get this moldy! That would be stinky.

I find that wrapping lint-loving toys like this in tissue paper before storing in my toy box keeps them pretty lint-free. Often, however, there's still a need to rinse just before use, as any little bit of dust will stick to the soft silicone until washed away.

You may store this wrapped in tissue paper in your toy box, or place it back in the plastic clamshell case it came in.

A thin plastic clamshell case features a custom resting spot for the toy and a little bit of information regarding its use and features. No detailed care or use instructions are offered.

The packaging is not discreet as it showcases the toy and its use, which is obviously of a sexual nature. If gifting this to someone, be sure you're in private. The packaging is also not so nice-looking that it can serve on its own as a gift box.

So as I said, the sleeve here is not something I'd ever use. It dulls the vibrations too much, and for me it's a bit awkward, wearing a toy on my finger for use downstairs. Still, some people may find this is a great use of a mini bullet.

The only drawback of the mini bullet being used on its own is that it's so mini, I freaking lost it! Somewhere under the abyss that is my bed, one of my cats is probably daily toying with it. Luckily I'm moving soon, so I hope to be reunited. It's seriously one of my favorite bullet vibes. It's strong enough to warm me up, or even get me off if my mood is already right. I'm a pretty tough orgasm though.

Happy fingers caress
$21.99
This product was provided free of charge to the reviewer. This review is in compliance with the FTC guidelines.