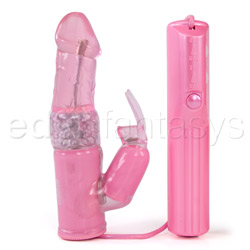 It's a good toy for someone that is new to toys-one, because it's not too big, and two, because it's not real powerful. It would have been better if it would have came with a battery pack inside it.
Pros:
Rabbit Clitoral Stimulator
Forward and Reverse Spinning Beads
The Pretty Pink Color
Cons:
Beads get slower the harder you go
Control Pack gets in way
Crevices are hard to clean
Rating by reviewer:
2
useful review
Although I do like this toy, it is not among one of my favorites. I'm not saying not to buy one, but of all the toys that my girlfriend and I have, this is one of the ones that gets used the least. We bought it last year when we first got together because it was neat looking, but since then we have bought better toys, and so this one gets to stay benched a lot.

It's a great vibrator|Climax rabbits pink princess, if all you want it for is the vibrating action. Although, I have to say, I'm not a big fan of the fact that it came with a control pack. I thought that would be nice, but you can only go so far with your hands with that thing in your hand. It is made out of jelly, which gives it a more real feel than rubber, but not as good as other materials on the market. It's pretty easy to clean, too, until you get to the rabbit head. My fat fingers have a hard time cleaning the little bitty crevices. Since this is a little harder to put a condom on, we just make sure that we clean it real good after each use. We use the KY Warming Lubricant and Personal Massage and that works just fine with it. I like to use it on my girlfriend, because she can get off to it better than I can. If it wasn't for the rabbit stimulator, I'd have a real hard time getting off.
This content is the opinion of the submitting contributor and is not endorsed by EdenFantasys.com