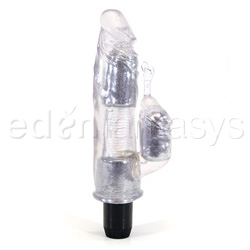 Intimidating, Fun. Why have you been discontinued?

This is only my second vibrator but I have to say I think I liked my first one better. This may be because of just my preference for firmer things. I've used this maybe ten times since I bought it. You know I have to wait for the house to be empty and such. It's large, loud, and has strong vibrations. It kills the baby batteries it requires which are three AAA. It was fun, but I kind of expected more from it.
Pros:
Dual Stimulation
Strong Vibrations
Flexible.
Cons:
Loud.
Battery Killer.
Clit Piece moves around alot.
Rating by reviewer:
3
No votes for this review
First off, when I saw this toy. I wanted it. I waited three months convincing myself that I didn't really need it but I guess I have no will power seeing that I bought it. There is really only one thing that I like about this toy which is the vibration strength. I think that is one of my favorite things about it. That and the fact that I can bend it to adjust it to directly hit my g-spot. I found it! It's a pretty good vibrator I guess. However, it's only my second.

Honestly I bought this and expected to find a mind blowing orgasm in it. Sadly, that dream was squashed rather easily. When I unboxed it I was terrified of it. IT WAS HUGE. I think I left it alone for two weeks before lubing it up and taking the dive. It worked pretty well and then I don't know I started to miss my first one. I mean my body reacted to it well, but not as I had hoped.

I'm starting to think that I need more variety in toys. This can really only be used for two things- clit stimulation and penetration. I became bored with this toy after awhile and used it yesterday, just to see if maybe on a different day in a different mood I would find it better. I found it fun and I still do and I like it. If it were to break I'd buy a new one, at least I would if I could. However, I am a little sad that I can't because it's been discontinued. I guess I will have to take good care of mine now.

The material of this toy is rubber, so you should keep it from touching other toys and should always use a condom when using it. You should you a condom because rubber can absorb more germs and dirt than silicone. Always use a condom if you're sharing and don't forget to clean it. A little bit of soap and warm water will do the trick and that is what I would use, if I didn't use cleaning wipes.

Oh! I almost forgot. Another reason that I'm giving this toy three stars is because. The clit stimulation piece kept moving around and I don't mean vibrating I mean flapping around. It drove me nuts and I had to fix it everything I was getting around to a good time. It was so annoying.
This content is the opinion of the submitting contributor and is not endorsed by EdenFantasys.com

My Double impact tags
About author