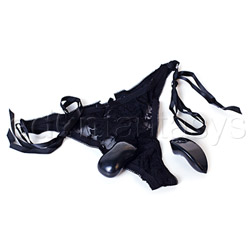 Is That Your Thong Getting a Phone Call?

This vibrating thong can easily be used as a solo toy. But as with all remote controlled vibrating toys, I'm of the opinion that it's much more fun to use it as a couple. One person gets the remote while the other just relaxes and enjoys the pleasure!

The materials used in the thong are as follows:

Both the remote and the bullet are made of ABS plastic. All of the pieces that make up this toy are odorless. The bullet is completely smooth and is not at all porous.

When I opened the packaging I was surprised to see how large the bullet was. This is our first experience with vibrating underwear and I was expecting the vibrating component to be significantly smaller than it is. In the pictures I've attached, you can see the size of the bullet in relation to the thong. We were hoping to be able to have some fun out of the house with this, but the bullet is so large that my wife won't be able to comfortably wear the thong with the bullet in it with pants on as well.

The best way that I can explain the shape of the bullet is to say that it's "bean-like." The curved shape of it allows it to rest against the body very nicely.

As for the thong itself, most users should find that it will fit them with little to no problems at all. The size is adjustable due to the ties on the side. The thong also features a small pocket that easily holds the bullet. Unfortunately, the overall feel of the thong isn't as great as it could be and the quality of it just felt sub-par.

Finally, the button on the remote control becomes illuminated when pressed which I thought was a pretty nice feature to have added on.

The bullet is placed in the pocket of the thong and you're ready to go. The included remote has only one button which operates the bullet. In order to turn it on, simply press this button once. Once the bullet is powered on each additional press of the button will activate a new vibrating pattern (there are 10 total pulsation and escalation patterns). I was very impressed with the amount of patterns that this little thing is capable of! When you're ready to turn it off, just press and hold the button for a couple of seconds.

My biggest complaint concerning this toy is how loud it is. And when I say loud, I mean loud! There is absolutely no way that this could be used in public without it easily being heard. Even across the room with the bullet on its lowest setting, the vibrations make a significant amount of noise.

As the bullet is completely waterproof, cleanup was very simple. That being said, there is a slight spacing around the battery cover on the bullet that makes me a little nervous. This led me to be a bit more cautious than I am with most waterproof toys when rinsing with soap and water. The care instructions for the thong state that it needs to be washed by hand in cold water.

For storage, we just placed the bullet and remote in the plastic packaging they came in.

This thong comes packaged in a small box. On the cover of the box is a picture of a model wearing the thong. The packaging is obviously sexual which is something to keep in mind if you are concerned at all about discretion. In the box was a small pamphlet containing some simple instructions. Additionally, a small 12V battery that is needed by the remote is included, though the 2 AAA batteries needed for the bullet are not.

After realizing that due to the size and loudness of the bullet, we wouldn't have much luck using this out of the house, we decided to take it for a test drive at home. My wife put the thong on and placed the bullet inside. After turning it on and cycling through a few patterns, she quickly commented on the fact that the vibrations were great, but she felt that they were much better when she moved the bullet so that one of the ends of it (and not the curved portion of it) pressed against her clit. However, the bullet is designed to sit with the curved portion against the body.

On another note, while we were playing I would sometimes reach for the remote to change the pattern of vibrations, but the bullet wouldn't react. Though the range is supposedly 19.5', I found that there could be absolutely nothing between the remote and bullet in order for it to receive the signal at all. Just something small that created some frustration for us both.
Follow-up commentary   I still don't like it 5 months after original review
We haven't really used this at all since I wrote the review. Still disappointed with the size of the bullet. Really unfortunate, as we'd really like to have a pair of vibrating panties that we love!
This product was provided free of charge to the reviewer. This review is in compliance with the FTC guidelines.