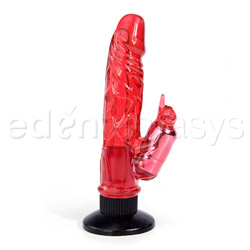 I love this toy. It is simple enough that it's easy to use, but with strong enough vibrations to really get the job done. The clitoral stimulator it perfectly placed, whether it looks like a koala, a beaver or a bird.
Pros
Nice size, Realistic
Cons
One speed, hard to remove batteries
Rating by reviewer:
4
extremely useful review

This toy is made of jelly, which is almost like a rubbery plastic. It isn't completely rigid, but it's stiff enough to get the job done. I would say that it is almost the same stiffness of an average penis when fully erect. It is slightly bendable, but I wouldn't recommend trying to bend an erect penis to compare. When I opened the package, I didn't notice any strong smells, but I decided to give it a sniff just to see and my first thought was almost a rubbery version of marijuana...one of my roommates agreed, the other one thought we were nuts. I've washed it a few times and the scent is still sort of there but not as much. I still think it smells like pot...juss sayin'

The Wall Bangers Deluxe Bird is very realistic with the tip shaped like the head of a penis and the veins running down the shaft. From the top of the shaft to the bottom of the suction cup, it is about 8.5" with about 4.5" insertable. The suction cup base is big and black, approximately 2.5" in diameter (for those of you who don't know, that means from one side of the circle to the other) As for the clitoral stimulator, it is suppose to be shaped like a bird but when I look at it, I see a koala. I looked at the box to make sure I received the right one and the only place it said anything more than "Waterproof Wall Bangers Deluxe" in the title was on the back, where it added "Beaver" to the end... so I have no idea what that little animal is suppose to be, but whatever it is, it's my new favorite animal...Anyway, the "bird" portion, which is the portion with the vibrator, is about an inch and half.

The properties in the product description say that it "...pulsates with powerful multi-speed vibrations." I haven't figured it out yet, but as far as I could tell, there was only one speed and it was fast. To turn it on, you just screw the base on tighter and the bird comes alive.

Inserting the batteries was a breeze, and then I realized I put them in wrong. Taking them out was NOT an easy task. I tried to pry them out with my fingers and couldn't quite get it, so I tried to find a pair of pliers. I never did find any but I'm glad I didn't, since I think that would have ruined my rechargeable batteries (which are a necessity when you like to "play," in my opinion.) So I had to try to get them out just by wiggling them and eventually they popped out, but it wasn't fun.

It didn't seem loud when I was playing around with it in the living room, but when I took it into my bedroom and REALLY started to play with it, I felt like it would have woken the neighbors. My roommate said she didn't hear anything though, so it was probably just in my head.

Since this toy is made of jelly, you should be careful and don't share your toy without using a condom. Jelly products cannot be boiled and you shouldn't use strong soaps either so there is no way to sterilize it. It can be cleaned using warm water and toy cleaner. Lubes that are safe to use with this toy are water or silicone based.

There were no actual instructions on the box, so that was a bummer. It wasn't discreet either. It has a woman in her underwear looking like she is thoroughly enjoying herself. There's also a large picture of product on all 4 sides of the box, as well as big letters that say "Waterproof Wall Bangers Deluxe." Bulleted points on the front of the box state:
"Powerful suction base"
"Vibrating clit stimulator"
"Perfect for shower or spa"

Back of box has a paragraph that says:
"Enjoy wall-bangin' satisfaction every time with this incredible vibrating suction dong with clitoral stimulator. With its powerful suction-cup base holding the dong securely in place, you'll get thrilling stimulation right where you want it. stick it to the floor, wall, bedpost, or almost any flat surface -- you'll be amazed how it stays put during every passionate thrust! The soft jelly material feels life-like and bends to conform to your contours , while the vibrating clit stimulator hits the right spot every time. Best of all, cleanup is a snap after the fun!"

It doesn't really make for a good spot to store it. It wouldn't be a horrible place, but it's just a cardboard box.

I really do love this toy. The fact that it's hands free because of the suction cup just makes it that much better. I don't know if it's because I'm not that experienced with toys yet, but it seems pretty powerful and it's quiet enough that you can use it when you have roommates, or family that you don't want to know what you're doing. I can't wait to use it in the shower. I haven't yet because I read in other reviews that it can be pretty loud in the shower so I want to wait until I have the place to myself.

I like to think of different ways to use toys, so I decided to turn it around and use the clitoral stimulator for...other things. I paired it with my pocket rocket and had an amazing orgasm. I really like this toy! I just wish that it had the other settings, since I prefer to start out with light vibrations.
Follow-up commentary   I still like it 23 days after original review
This is now my go-to toy. I absolutely love it. I actually managed to make a mount of sorts so I can suction it onto the "base" and straddle it...it almost does all the work for me. Thank goodness for the suction cup!!
This content is the opinion of the submitting contributor and is not endorsed by EdenFantasys.com

Reviewed by Lickable Lollie (Eden Writer) Use code U71 at checkout for 15% off!
Rank
5.1
wrote 26 reviews
This review was edited by
Comments
Make a post
Forum
Thank you for viewing Wall bangers deluxe bird – sex toy review page!
Top