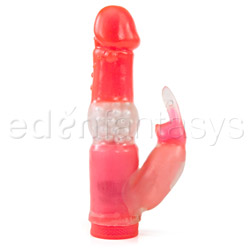 Overall a great toy, totally worth the money and great for beginners. Capable of heavy duty intensity but can also be feather light. Very cute and innocuous, but the user is definitely in for a good time. Easy hand held controls, good size and made of lifelike material.
Pros:
low price, great clit stimulation, rotating shaft, easy controls, realistic jelly shape
Cons:
a little loud, pearls didn't add much, I wish it had an on/off button
Rating by reviewer:
3
useful review
I recently bought a Jack Rabbit|Jack rabbit for myself on the recommendation of a few friends of mine. While I was doing my research to see what would work best for me I was really impressed at all the features that can be packed into one toy. Ultimately, I wanted to have to do as little work as possible.

The first time I pulled it out of the box I was actually a little surprised with the realistic shape and size- I had only ever experienced your most basic of vibes before. I had a laugh at the little smiley face on the underside of the head while I familiarized myself with my new toy and wondered how effective the whole set up would be. I started out slowly, it was actually a little bit of a squeeze to get the shaft in, but once it was there it was very comfortable and the jelly felt really interesting and lifelike. it took a little maneuvering to position the rabbit and a little more if I wanted to get more g-spot stimulation|G-Spot 101 Guide, but once I got it there all I really needed to do was keep everything in place and hold on for the ride.

The bullet in the bunny had some pretty intense vibrations, I think they're meant to mostly stimulate outside, but they definitely worked their way up the shaft. The rotating shaft is a nice feature because you can kind of rock with it and of course it makes the whole experience more realistic, and I can see where some women would really like the pearls. Personally, I could take or leave them. The sound they made reminded me of one of those push and pop toys that kids have and every so often one would move in such a way that I felt a little pinch. The only other thing I wasn't such a huge fan of was how loud the rotating shaft was. It made it a little difficult to keep my mind in the gutter so to speak. No part of it was so loud that one could hear anything behind closed doors- nothing but me, that is.
This content is the opinion of the submitting contributor and is not endorsed by EdenFantasys.com