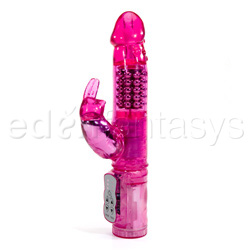 If you're looking for something to use every day, keep searching. It's too clunky to use just for clitoral stimulation, and the penetration aspect leaves something to be desired. However, if you are a fan of jack rabbits in general, the waterproof aspect of this toy extends the range of pleasure for solo use and couple's play.
Pros:
Wide Girth
Powerful Rabbit Clit Stimulator
Waterproof
Dual Direction Bead Rotation
Cons:
Loud
Dull Bead Sensation
Rating by reviewer:
2
useful review
It took me longer to get this rabbit out of its cage than it did to get me out of my clothes! The sheer size of the Jack Rabbit is appealing, and the idea of having simultaneous clit stimulation and vaginal penetration will drive a girl wild! Needless to say, I was dying to try it. Unfortunately, partly due to preference and partly due to performance, this rabbit will not be at the top of my usage list.

When I first opened the package, I was pleased with the lack of odor. Some jelly products come with that terrible "new toy" smell, but this one didn't. I was immediately disappointed when I turned it on because I felt that it was quite loud . . . about three buzzes (I was seriously thankful that I live by myself). Still, I wanted to give it the good ol' college try.

My first experience with the Jack Rabbit went quite quickly. The bunny's ears are QUITE powerful and can rival any bullet. During my second use, I used less of the clitoral stimulation to focus on the vaginal penetration. The rotating beads, while a nice idea, weren't really effective. Not only were they loud, even inside of my vaginal walls, but I could hardly feel their rotation (which could be due to the heavy jelly coating visible on the beads). The beads do, however, rotate in both directions, which would have been nice if I could have felt them. The girth was nice, but the shape wasn't quite long enough or thick enough to be particularly pleasing. I tried to add more pleasure by manipulating the Jack Rabbit in and out, but the clitoral rabbit keeps you from getting enough movement to be pleasurable.

I haven't used this product with condoms, but since it is a jelly toy, which contains phthalates, condom use is recommended. The jelly construction, however, makes for seriously easy cleaning!

Overall, this toy is fun for a different sensation every now and then. I've enjoyed using it as a foreplay tool a few times, but it's not my go-to toy for solo play. I much prefer being able to thrust in and out, and my bullet is much quieter when I'm seeking clitoral stimulation. However, if you are dead set on purchasing a rabbit, the fact that this one is waterproof would push it to the top of my list.
This content is the opinion of the submitting contributor and is not endorsed by EdenFantasys.com