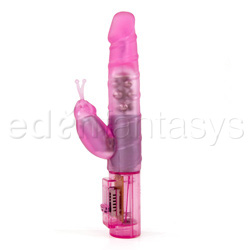 Jesse Jane's Pink Lady Bug is a really cute toy that has it's flaws. It's not waterproof and the controls feel cheap. It's on the small side and would be great for a beginner. The battery door slides open easily when you are using it and the rotation is very weak. Overall it's not so great but I had some fun times with it so it's not too bad either. I'd definitely recommend it to beginners.
Pros:
Feels very soft, cute design, small girth, easy to operate, strong vibrations
Cons:
PVC, Not Waterproof, Battery door slides open easily, Rattling vibration sound, Weak rotation
Rating by reviewer:
3
extremely useful review

The controls and the sliding battery door are made of a really cheap clear pink plastic.

The Pink Ladybug looks really pretty! I love the pink color and the cute ladybug reminds me of a rabbit on typical rabbit vibrators. I usually don't like any toys that remind me of bugs but the ladybug looks really cartoony and cute and it doesn't bother me. The insertable length is about 4 1/2" and it's about 1 1/2" wide. If you prefer toys with more girth this toy will not work well for you. It's on the small side but it's still enjoyable and honestly I don't always want something huge to play with. I think the size is perfect for beginners or for those that don't want super huge girthy toys.

The ladybug can be moved very easily when you press on it so it makes it quite easy to reach the clit. The lady bug's antennae vibrate back and forth due to the strong vibrating bullet inside. The antennae are very thin and spindly and move around easily so sometimes it can be a bit of a challenge to keep them from folding back onto themselves and keeping them in the right spot.

This toy is loud enough to be heard through walls! It also makes a high pitched buzzy sound. It's not terrible but probably not something you'd want to travel with or use in a house with other people. The higher vibrations make the base rattle which makes it even noisier but if you hold the base firmly it won't rattle.

The vibrating ladybug antennae have strong vibrations but the antennae are really spindly. I wish they were firmer so they would stay on the clit easier. They still feel really nice though! This toy gets me off but I think it ultimately depends on what your personal needs are. I don't need a lot of girth or electrocuting vibrations to get me off and I don't like really weak vibrations either. This toy falls somewhere inbetween.

When you have the vibration on and you turn on the rotation the vibration definitely decreases in power which is definitely a major flaw. Also when you slide the buttons upwards you naturally tend to slide the back battery door downwards. It's annoying to me and sometimes I even get tempted to tape it shut! If you use it for too long you can definitely feel the motor heating up and you need to give it a break. I'd also like to add that if you clench down on this too hard the rotation slows down considerably because it's not very strong.

This is a jelly toy and it cannot be sanitized like silicone or glass. It's a tricky material that needs to be kept very clean. If you share this toy you need to cover it with a condom.

This toy is not waterproof! Behind the slider buttons the batteries are completely exposed so you can't get it wet or else you'll ruin it. I know I probably shouldn't do this but I hold the base with one hand to cover up the open areas and wash the shaft and the ladybug with toy cleaner. Then I carefully rinse it off being careful not to splash water on the base. I'm pretty good at this so I've been successful at it so far.

You can always spray it with toy cleaner and let it sit so it kills all the germs and then carefully rinse it off or wipe it off. Just be careful!

This toy can be used with silicone and waterbased lube.

This toy was made specifically for Jesse Jane and is from California Exotic Novelties.