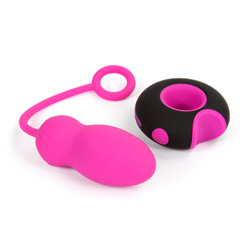 This toy is definitely worth owning if you don't have something like it already. The vibrations are nice and strong, while not being strong enough to cause soreness and the fact that it's rechargeable means you don't have to put off using it for longer than it takes to charge it, though waiting for it to charge can be tedious.
Pros
Shape is really good for delivering sensation over a wide area.
Cons
Takes long time to charge
Rating by reviewer:
4
useful review
I really like this toy. It's become my favourite - it's got strong vibrations, a wide variety of choices and the vibrations don't make my hand go numb when I'm holding the thing. The separate remote control makes it very easy to change settings, though having to cycle through them might not be something some people want to do. I personally don't want to need to coordinate too much when I'm working on myself, so button mashing is perfect. The toy is fairly loud though. I think it's the loudest vibrator I own since nothing less than a pillow will muffle the noise enough that someone can't hear it right outside the door or sitting several feet away.I guess that's the price you pay for deeper vibration.


The fact that it's rechargeable means I don't have to fuss with batteries, but I do have to remember to plug it in and the vibrations do lessen when the toy is low on power. I don't always remember to charge it before I need it, so sometimes I have to wait before I can use it again. A charge seems to go for about an hour or so and, fortunately for me, charging the toy after the initial use doesn't take the full hour, though it depends on how low the battery gets. It can also work just fine on a partial charge of ten minutes or so. The egg takes at least thirty minutes to get to full charge after a couple of uses going to ten minutes to a time. The controller can take as little as four minutes if you charge it every time you do the egg or as much as fifteen, if you wait a few uses, since it drains less power.


The egg surface is broad enough that it can provide stimulation to the entire labia if placed between the folds. The sensation from that is pleasant and a good warm up and once the blood's flowing I just use the tip of the toy on my clitoris to finish. You could also use it vaginally but since it's only labeled as splash proof, with a condom would be best,which is what I did. It did deliver strong vibrations when inside but I'm mostly interested with external use, so I don't know if it would be enough for those who want g-spot stimulation.


The material is matte silicon. It's very pleasant to the touch, kind of soft. There's no odor and no texture I can see. The toy is excellent for beginners and probably just fine for advanced users.
As the toy has strong vibrations, it can be used nearly anywhere you want to get stimulated, the back of the knees the nipples, as well as the obvious. I don't think it should be used anally since there's not enough of a handle or flare for it to be absolutely safe. It's good for couples since the separate remote makes it easy to play with a partner. I don't think it would be very good if you wanted to get stimulated without someone in the same room noticing. If used internally, with a condom, the toy might be good for public play.
Follow-up commentary   I still like it 3 months after original review
The toy still works though I've found that I've gotten a little too sensitive to use it very often. The broad bullet means I can't focus it very well and end up overstimulating an entire area sometimes.
This content is the opinion of the submitting contributor and is not endorsed by EdenFantasys.com