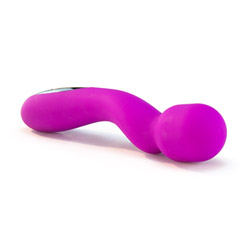 Let's Name This One "Purple Mini Me"

This is a great addition to any wand lovers stash. It is not bulky like the larger traditional wand models. It is easy to maneuver and very powerful. Just whip it out and start buzzing!
Pros:
Petite, light, rechargeable, powerful, multiple vibrating functions, works underwater
Cons:
May get uncomfortable to hold for some after awhile, shakes in one's hand's
Rating by reviewer:
4
extremely useful review

This is your typical wand massager but much smaller. And it has many many patterns from vibrating to pulsating and escalating. It can do all the functions of a regular size massager. Reading a review here at Eden pretty much means you are interested in knowing how it performs as a sex toy. This does a wonderful job in stimulating the clitoris. That was the sole purpose why we ordered this. Ow loves clit stimulation. She loves her larger power wands and would be considered an advanced user. That being said, she likes this "mini me" a lot. This mini massager would be great for all users. It for sure would not intimidate a beginner being so small and pretty. 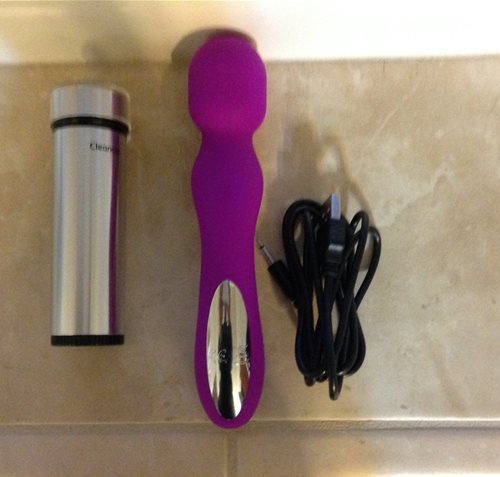 Although it has multiple settings there is not a low intensity one. So it may be too powerful for beginners to use on nipples, the penis glans or other sensual areas.

This is coated almost entirely with silicone. Only the shiny silver plastic plate, which I'm guessing houses the control panel is not. It is pretty firm when you squeeze it, but is flexible. I can bend it nearly in half easily. The mini wand is smooth with no bumps or ridges. When I run my finger down it, there is a very slight drag. When you put it to your nose and inhale you can detect a very very faint smell. Not gross, kinda like a plastic smell.

There appears to be a seam running lengthwise on this. However, you have to really eye-ball it to see it. You definitely would not feel it. 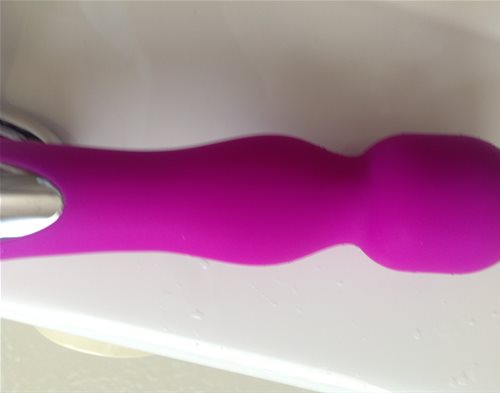 The curve in the handle is perfect for grasping with forefinger and thumb. The head is quite bulbous, great for targeting the clitoris. The bottom of this purple mini me is cylindrical . Great for holding with thumb, forefinger and middle finger. Holding it there gives you a longer reach.

This smaller wand also makes it easy to stick down one's undies. Positioning it on the waist band allows it to be used hands free. The entire wand shakes quite a bit, unlike larger wands where only the head shakes. OW prefers to position it like that. Otherwise it gets hard to hold after a while due to it's power. 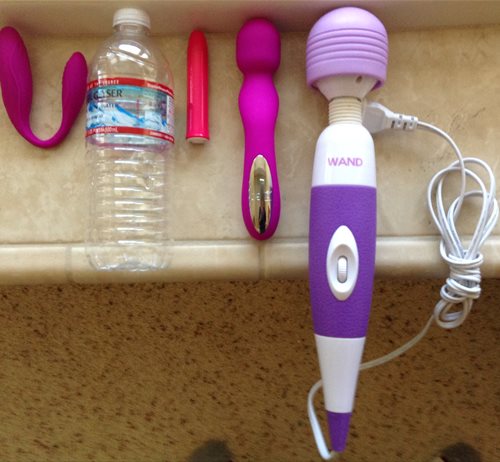 The on/off button is on the bottom of the wand on reverse side of silver plate. The setting button is under it. They are marked with the universal pic of power on/off and wave/juice. One push on the power button and it's on. One push again and it will shut off. When powered on a bright light will appear in between the 2 buttons.

Each depression of the wave/juice button changes the settings/patterns. When either is depressed you will feel and hear a click. The buttons are flush with the body of the wand and do not stick out. 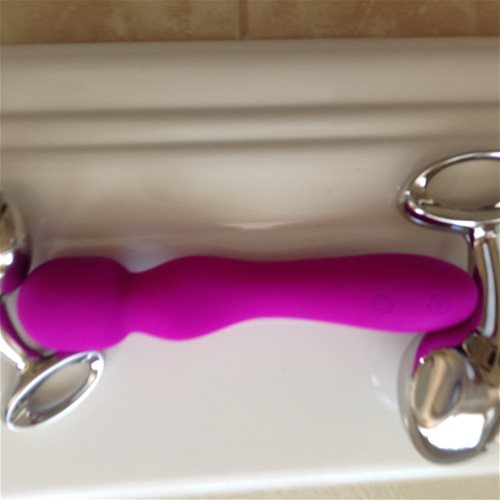 On/Off button and setting button on the right side by the nJoy 2.0

The bottom button changes the settings and the product page states there are 30 vibration patterns/Escalating/Pulsating/Vibrating functions. We did not try to distinguish the different ones. Ow was only interested in using it on her clit. She stopped clicking when happy with what was happening. When she powered the wand off and used it the next day, it started on the same pattern she left it on.

"Mini me" is rechargeable and comes with a partial charge for immediate use. I let it totally run down and recharge for testing purposes. It took little over 4 hrs to charge when totally discharged. When fully charged it ran for 30 mins then stopped. When I turned it back on it did come on, but again shut itself off in a few seconds. I did the same tests again and the results were the same.

This came with a USB charging cord, but not an AC adapter. I used a cell phone adapter to charge ours instead of in our computer. The male pin goes into the bottom of the wand. When charging it lights up. When finished the light goes off. 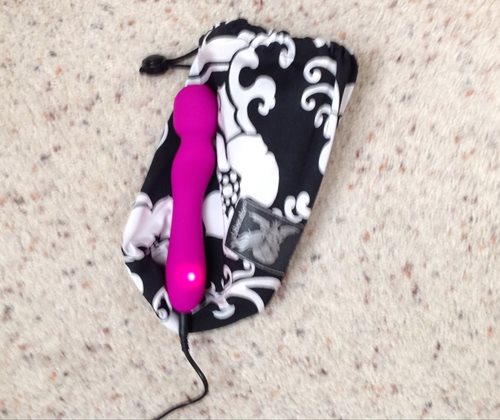 Charging
As for noise level it is not very loud. Using it under the blankets we could still carry on a normal conversation and hear the TV.

For testing purposes I dropped this in a pan of water while it was on. It worked fine and still worked the next day.

Silicone is easy to care for. It can be washed in warm water with soap. Silicone is nonporous and will not harbor bacteria. And it can be dropped in boiling water for 3 minutes to kill any germs. By now you probably know silicone is rated a 10 on toy materials safety list. Highest ranking possible. And is Hypo-allergenic / Latex free / Non-porous / Phthalates free.

All silicone will pick up dust, lint and hair so best to wash before and after each use.
And of course do not use silicone based lubricant with any silicone toys. Lubricant or water based clit stim gel will make the wand perform better.

This came in a bag wrapped in shipping plastic. No shrink wrap, clam shell or box. Low cost and low thrills. Also no instructions. All the information one needs can be found on the product page on EF. 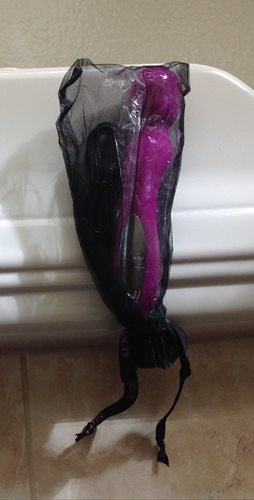 One look at this and our first thought that popped in mind was: This is the perfect size for anyone's clit! It is smaller than her other wands and easier to whip out. And no cord! The power is strong. Just need to find a way to use it with no hands.

When we received it and turned it on it already has some charge. After washing it put it in action. It was more powerful than expected. The buttons were easy to use. After finding a setting, Ow left it there and let it do it's thing. She said it was very nice and loved not having a cord. The initial charge lasted about 12 mins. Not long enough to make her O. So she brought out one of her big guns to finish the job.

The next night she left her panties on and positioned "Mini-me" on her clit. Shelet her waistband secure it in place. She said the holding it made her hand shake too much. She buzzed for about 20 minutes and love the fact it did not heat up like the corded wands. She said it had more power than her current fav, the U vibe. I asked how it compared to her Eden and Hitachi wands. She said it was 20-30% less powerful but nice.

It is small enough to insert into her vagina, but she did not try it. She was tempted to. Perhaps in the future. We will comment on it in the follow up review, if she tries it. For testing purposes I did put it on different parts of my penis. It was not bad and did start giving me a rise. No doubt I will try it again when she is not using it.
That is something her large wands can not do. The heads on those are way too large and powerful.
Follow-up commentary   I've started to like it more 4 months after original review
OW loves this Mini Me ! Hitachi MW and Eden adjustable wand collecting dust ! Always finishes with one of the attachments. So easy to whip out ! Love cordless !
This product was provided free of charge to the reviewer. This review is in compliance with the FTC guidelines.

Reviewed by OH&W, Lovebears (Eden Advanced reviewer) Life will go on with or without us. Enjoy it while you can.
Rank
6.1
wrote 102 reviews
Comments
Make a post
Forum
No discussions yet.
Thank you for viewing Pretty Love rechargeable silicone mini massager – wand massager review page!
Top