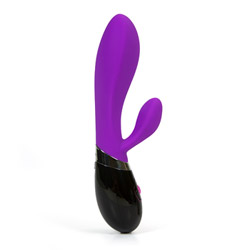 This rabbit's rigid G-spot shaft and flexible clitoral arm are both coated with matte silicone that feels luxurious and buttery to the touch; even so, this toy does not have any give except for the clitoral arm with a thicker layer of silicone. The rabbit’s base is made of glossy, black ABS plastic, while the silver decorative band separating the upper body from the base is made of metallic plastic. The silicone used on this rabbit has absolutely no smell or taste to it. The material is not draggy and attracts minimal amounts of lint and dust.

The main shaft and the clitoral arm both have four noticeable ridges running separately down the length of their body’s four sides; the ridges are pleasant to the touch and designed to provide additional stimulation to your sensitive parts.

The surface of the vibrator's handle is smooth except for the raised LED switch that is located in the center of the circular control pad. Although you can feel the slightly raised LED push button, it does not get in the way while you are using the vibe.

Since the texture on this toy is smooth and buttery, just a small amount of water-based lube should be enough to enhance your play.

The Eden Dual Delight Silicone Rabbit Vibrator is an average-sized toy. Its total length measures 8 inches long, while the insertable length is 4 1/2 inches. The widest part of its G-spot head has a diameter of 1 1/2 inches, and the narrowest part of the shaft measures 1 inch in diameter. The clitoral arm is 1 5/8 inches long, and has a diameter of 7/8 inch at its widest point. The space where the section of the main shaft levels with the clitoral arm's tip is 1 inch apart. It is worth noting that the flexible clitoral arm can be bent out to a 90 degree angle, away from the shaft.

The uppermost portion of the rabbit's G-spot shaft is formed in a conical shape for easy insertion. It is followed by an elongated, forward-protruding head that gradually tapered to a narrower shaft. The substantial shape of the voluptuous head is specifically designed to give extensive stimulation to the front vaginal wall where the G-spot is located. Additionally, if you gently thrust the insertable portion inside your vagina, its bulgy, elongated G-spot head will repeatedly stretch your interior walls and the sensation is phenomenal. Since the non-animalistic clitoral arm on this rabbit is very flexible and stubby, it would give most users great coverage on their clitoris.

The rabbit's three-button control is easy to use, it is ergonomically placed on the front of the rabbit's base. The built-in battery compartment with a splash-proof cover can be found in the backside of the base.

Here is a picture showing the exact measurements of the rabbit: 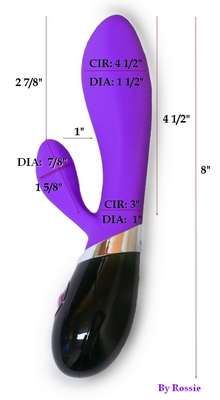 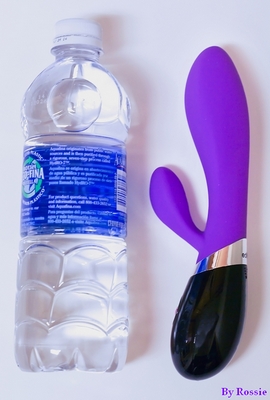 This rabbit vibrator is designed to stimulate the user internally and externally at the same time with two separate vibration motors. Since the motors are individually built inside the tip of the G-spot shaft and the clitoral arm, these are the two parts with the strongest vibrations and pulsations. But, you can still get plenty of stimulation from the other portions of the two arms. In fact, since the clitoral arm is flexible and much smaller in size, it carries the vibrations and pulsations better than the main shaft. The rabbit's high-frequency vibrations will numb your hand if you keep a firm grip on the toy, yet these powerful vibrations feel wonderfully nice when you use them to stimulate your vagina and clitoris. Since the rabbit is programmed to provide synchronized vibrations and pulsations to the G-spot and clitoris, it will help users achieve mind-blowing blended orgasms easily.

On the front of the rabbit's base, you will find the circular control pad with a raised LED switch in its center. There are three buttons on the control pad: a LED push button and a set of + and - buttons. The pink LED push button is the vibrator’s ON/OFF switch. To turn on the toy, simply press and hold the button down for "two" seconds, and repeat the process to turn off the toy. When you turn the toy on, the pink LED indicator lights up and the rabbit starts on the first setting with low and steady vibration. The LED indicator will turn a steady pink while the toy is vibrating to the four vibration modes. Yet, the LED will flash in unison with the three pulsation patterns whenever the rabbit runs the pulsation modes.

This rabbit has seven functions of intense vibration and pulsation that can be adjusted through the set of + and - buttons.

Since there are electronic parts, the only way to sanitize this toy is by bleaching it for ten minutes in a 1:10 bleach solution (1 part bleach to 9 parts water). Other methods such as boiling and running it through the dishwasher will damage the toy’s electronic components. To prevent the bleach solution from seeping into the toy’s battery compartment, you can fill a large glass with just enough bleach solution to soak the toy’s silicone portion. Afterwards, please rinse the bleached portion with water, and dry the toy thoroughly.

To avoid possible chemical reactions, please do not store this rabbit next to other silicone toys. For a similar reason, you should use water-based lubricant rather than silicone-based lube on this rabbit. If you want to use silicone lubricant with this toy, you should first do a patch test somewhere near the bottom of the shaft to make sure the lube will work with the material.

In order to reduce packaging waste, this rabbit vibe was shipped in a sealed plastic bag within a white poly bubble mailer. The only thing accompanying this toy is a tiny user manual that contains everything you need to know about the toy.

Despite the fact that it has an ineffective splash-proof design, I still give this high-performance rabbit 5 stars.
This product was provided free of charge to the reviewer. This review is in compliance with the FTC guidelines.