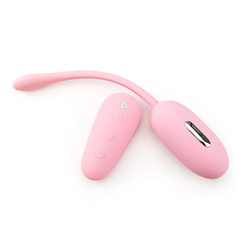 Elektra is a lovely toy if you're interested in trying out e-stim play. The pleasure is different from anything I've ever felt, but there are times when you may feel a twinge of pain - like a period cramp if it shifts too deep into you. If it weren't for that, this toy would have earned 5 stars.
Pros:
Silicone
Waterproof
Strange/New pleasure
Powerful for its size
E-stim lasts 8+ hr nonstop
Cons:
Vibration lasts 1hr max
E-stim pulses sometimes feel like period cramps??
Rating by reviewer:
4
extremely useful review

The Elektra Plus Vibrating Egg (or Elektra for short, as I'll be calling it), arrived in a plain, unmarked cardboard brown box without any logos or hints about what could be found inside. Upon opening that box, I found plenty of brown cushion-paper which kept it from shifting or getting damaged during transport. Elektra's box itself is covered by a pull-off sleeve. It's visually appealing - a pale shade of pink surrounded by solid black. Minimal information can be found on the front. The back describes features, short instructions, and a warning (about asking a doctor prior to use if you have a heart condition). There are no pictures of Elektra on Elektra's box; it's easily gift-able, but one glance at the box (to read what it says in bold text on it) will give away what it is. 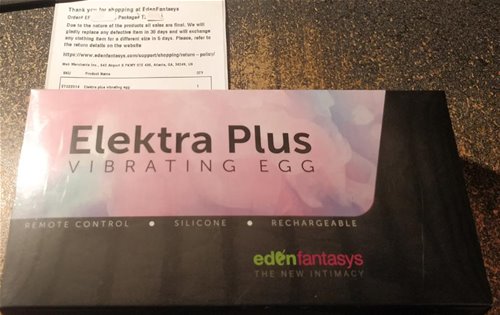 Pulling off the sleeve and opening the box reveals a plastic insert, which houses the remote, Elektra, and a mesh storage pouch. The toy is made of very pleasant silicone. Unlike most my other toys, it doesn't attract (as much) lint/dust due to its texture. The instructions (on the box sleeve) tell us to charge the egg prior to use, so I plugged it in. Elektra has two parts to it - the body, and the tail. The body has a texture - raised lines running down the length of the egg portion. About halfway down, we find two metal bits (on opposite sides of each other) just under 1in in length, which conduct electricity. At the end of the tail we find the on-off button. There is light beneath the surface of the power button which blinks while charging, during standby, and is a steady light during use & when it's done charging. 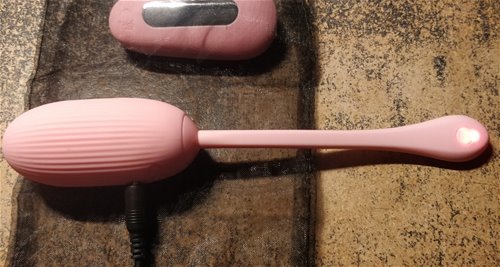 It seems that Elektra arrived mostly pre-charged, as within 15 minutes, the blinking light (indicating that it was charging) became steady instead. The remote had done the same. I unplugged the device, cleaned it with soap and water, grabbed my water-based lube, dropped down on my trusty bean bag, and looked the toy over in my hands. Before going into the First Use, I'm going to quickly cover the controls, as they're a bit different.

[CONTROLS]
It took some time to figure out the exact controls. Frankly, after two weeks, I still get confused with using it sometimes, but that's just me confusing my toy collection's controls altogether. To "pair" the remote to the egg, you need to long-press the egg's power button until it blinks. You then grab the remote, choose which stimulation to start with (vibration or e-stim), and long-press the corresponding button. Contrary to what I keep thinking, you don't need to press the on/off (remote) button to pair the egg to the remote. The remote on/off button does not directly power on/off the egg - it is more of a standby key.

[FIRST USE]
I played around with the controls, trying to get a feel for how they work. I was a bit scared to use the e-stim, to be honest. I figured - hey, it's probably not going to be anywhere near powerful enough to shock me into paralysis, right? So I messed around with it outside of me first in my hands. Elektra has 3 vibration speeds (low/medium/high) followed by 4 vibration patterns - more details on that in the Vibration Map section.

It always starts with the lowest vibration strength after turning the toy off or putting it into standby, so you will need to remember what you like best if you like shuffling through patterns. Then I turned the vibrations off and pressed the e-stim button. It turns out that the metal bits are the only bits that will shock you, and touching your fingertip against one of them feels like tiny needles prickling you. Very peculiar feeling. It reminded me of what a TENS unit I use for chronic muscle pain feels like against my fingers. I then decided it was time to give it a go internally.

After basically dousing the egg in my favorite water-based lube, I slipped it in, held down the button to power on the egg (at the end of the tail), then turned on the vibration. Yep, I was avoiding the e-stim. It's a bit scary & exciting. The vibrations are actually quite powerful for something this size. Surprisingly, they're more on the rumbly side than buzzy. After running through all the vibration patterns, I stopped them, and mentally argued with myself for a good 2 minutes, trying to convince myself that it won't be a painful experience, that everything will be a-okay.

I took a deep breath and pressed down the e-stim button.

I immediately felt my abdomen move against its will. I'm not even sure what was moving, to be honest. All I know was that something in my belly-area was moving on its own. It might have been the vagina, cervix (is that possible?) or the uterus itself. It took a few minutes to get used to the feeling, but once the initial panic subsided and I settled down, it started to feel rather pleasant.

There is no way to exactly describe this feeling other than compare it to a TENS unit (which... does the same thing, but externally - it shocks you). If you have never used a TENS unit before, basically you can feel these (mostly painless) shocks (they don't feel like hard zaps, like those depicted in cartoons) run through the local muscles - something akin to that of making your muscles pulse in waves, like as if they (the muscles) were an ocean themselves, the shocks the crests of the water, and you can feel the surface of the water moving up and down. Bad analogy? Maybe. But it's hard to describe color to a blind person as well.

After figuring out that it won't kill me, I turned on the vibration in conjunction with the e-stim. Very, very strange feeling. But pleasant. I left the vibration on the third strength and the e-stim on the first. I was a bit scared that going higher would hurt (it doesn't). The toy lasted about an hour before running out of juice and needing to be re-charged. I did not orgasm with this toy on the first try (or any consecutive try).

After that first use, it became clear that shocking my nethers probably wouldn't kill me, so I went back a few times, testing out the vibrations on their own, and the e-stim on its own. There are a few things to note.
- Vibrations (on their own) won't last longer than a solid hour - they take a lot of effort for Elektra to dish out.
- The e-stim on its own can last all day (over 8 hours nonstop) without running out of battery.
- Sometimes, the toy shifts inside me (I'm alive, my muscles will twitch, and the toy will move).
- Sometimes, Elektra moves into a dip in my vaginal canal, and the shocks feel like (annoying-painful) period cramps. Not fun. I can temporarily alleviate that by pulling on the egg and moving it out of that dip, but for some reason, it always seems to inch back in there during that session if it happens.
- Pulling the toy too far down (towards my vaginal lips) is painful; I would not suggest trying to remove the toy without turning off the e-stim first.
- For hours after removal (and even the next day, sometimes), I can feel ghost shocks/pulses, where my muscles twitch as if the egg were still in and pulsing away. Very weird, but not a bad kind of weird.
- The e-stim does not seem to work well if I'm not lubed up. Natural wet does not seem to conduct electricity as well as water-based lube, and sometimes requires re-application if I have it in for a longer period of time.

TL;DR: e-stim can be somewhat painful under certain circumstances, but there are ways to alleviate said pain. Might be a wet dream for masochists, but I'm not masochistic at all.

There are 7 vibration strengths/types & 3 e-stim strengths.

The e-stim simply increases in strength, from what I can tell, not speed.