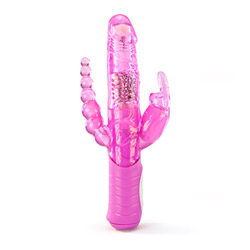 This is a great toy for beginners who are interested in trying a double penetration toy. It's fairly small, but it's got strong vibrations and it's very easy to use. It has seven different vibration settings and it's very quiet even on its strongest setting. Quiet doesn't mean weak though, because those little bunny ears vibrate with a lot of intensity.
Pros:
Cute, Quiet, Seven vibration settings, Easy to use, Strong vibrations
Cons:
Material attracts some lint and pet hair
Rating by reviewer:
5
useful review

It is made from TPR and has an almost "squishy plastic" kind of texture like those old jelly shoes that used to be popular. You can squeeze it and it's got a lot of give, which is nice when you squeeze around the metal beads in the middle of the vibrator. When you turn on the function to make the beads start twisting around they really add some nice textures to the middle toy. It also has a bit of texture at the top, where it's shaped like a penis head with a few ridges right under it, which you can't really feel too much once inserted.

The bunny's ears are smooth, but there are two of them and they pick up a lot of the vibration from the toy and add quite a bit of stimulation for the clit. 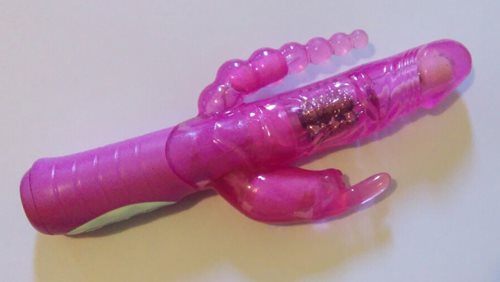 There are three buttons on the front of this toy. One of them is the power button that just turns it on and off. When it's on, there should be a blue light coming from behind all three buttons, which disappears when you turn the button off. While it's on if you press the middle button with a picture of a wave on it you get to cycle through the different vibrations. There are seven different vibration patterns. The first three are solid vibrations that go from soft to much faster. Then there are a series of different pulsating vibrations and they're all as intense as the strongest vibration setting.

It was extremely easy to figure out and use and for just taking a few AAA batteries it's a surprisingly strong toy. It's also much quieter than a lot of my vibrators. You could have it under a blanket and it would be pretty hard to hear. It's just a very faint buzzing sound that's quiet even when holding it in your hand right next to your face.

This toy is very easy to take care of. You can clean it with some warm soap and water after you use it. I'd also clean it before because the material kind of attracts some lint and pet hair.

It's a bit porous so it shouldn't be shared, especially because part of it is used anally.