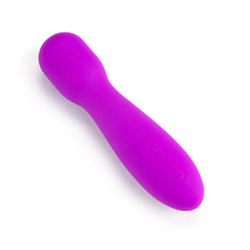 If you're looking for a small and discreet toy for clit stimulation, this is it! The Wonder Wand is small in size, but powerful in vibrations. It's also softer sounding than a cheap electric toothbrush. It's waterproof and can be charged in any USB port.
Pros:
Waterproof, 30 vibration patterns, Rechargeable, Quiet
Cons:
A little pricey,
Rating by reviewer:
5
somewhat useful review

It's also waterproof and I personally haven't had any problems with it in the water.

It's made of silicone. The whole toy has a very smooth and soft texture. It's so smooth that you can only see the seam if you're really looking closely and trying to find it. It may attract some pet hair or lint but I've had it sitting out for a couple days now and it hasn't gathered up any cat hair, unlike some of my other toys that have a slightly tacky feel to them. The silicone doesn't have that same drag you can get from some toys that kind of pull at your skin if you don't use enough lube.

It could be a beginner toy or for more advanced users. It's small and simple enough to use that I think it would be really appealing for beginners, but I've been using sex toys for six years now and I'm still quite a fan of this little guy.

Silicone is not porous at all but I don't know that I would suggest boiling it or throwing it in the dishwasher because while it is waterproof, I'm not sure how it would handle something like that. I'm sure it would be fine, but I'd rather just keep it clean with soap and water.

It looks like you're typical "wand" type toy. The top one inch is the part that you use for stimulation. It bulges out more than the handle of the toy and then the handle is the part with the controls on the front and the charging port on the very bottom.

The entire toy is only five and a half inches long and even the thickest part on the tip of the "head" is still only about the circumference of a quarter. It's very small and fairly discreet. If you take it out around people it might be obvious that it's a sex toy, but it's little enough to be easily hidden in a purse pocket or something like that.

The whole toy is completely smooth aside from a small metal plate on the back with a little picture warning you not to throw it away with your regular trash (due to the batteries), and the two buttons for the toy. There's one to power it on and off, and one to switch the vibration pattern.

It could be great for beginners because it's very small and easy to figure out.

This is such an easy toy to use. There's a little charging port at the very bottom of the toy that you plug into a USB port to charge it. There are just two buttons on the front. One of the buttons turns it on and off and the other button lets you cycle through thirty different vibration patterns. They're all various speeds and intensities.

It's actually a strong little toy for as small as it is. It's not exactly blow you away powerful, but it's up there with some of the best toys I have as far as vibration power. It's also such a quiet toy. I can use it under a blanket and hardly hear it, even without turning on any fans or anything like that.

It's also waterproof. I've used it a couple times in the bath and in the shower and haven't had any problems at all with it so far.

This is very easy to keep clean. You can just wash it off with some soap and water or even baby wipes. You can store it in most places because it's so small. I just have a toybox that I keep everything in.

You can use a water based lube with this toy.
Follow-up commentary   I still like it 3 months after original review
I love wand massagers so much and this little guy has yet to let me down. It holds a charge nicely, and it's just an adorable toy.
This product was provided free of charge to the reviewer. This review is in compliance with the FTC guidelines.

Reviewed by Princess-Kayla ♥ (Eden Writer) Not a shred of evidence exists in favor of the idea that life is serious.
Rank
6.6
wrote 201 reviews
Comments
Make a post
Forum
No discussions yet.
Thank you for viewing Pocket wonder wand – mini wand massager review page!
Top