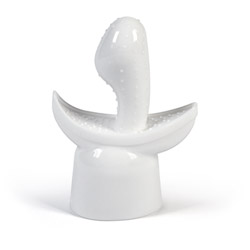 We like to name all of our toys. I named this one "The Smile Maker".
Wands pretty much only do one thing. Take that back, two. They also relieve sore tight tense muscles. With this attachment one can get some internal stimulation along with clitoral. It is not as far reaching as a rabbit, it is much stronger. Like an alternative to a Sybian machine.
The DS attachment/wand would be a great experience on a sex pillow like the Axis. Or used on a mount.
Pros:
Additional fun with your "boring" wand
Low price point
Sybian like
Cons:
Made of TPR, however it shakes more effectively
Only comes in white
Rating by reviewer:
5
extremely useful review

This sleeve attachment will fit any wand with a 2 1/2 - 2 3/4 head. To use you just slip it over the head of your wand. It is designed to stimulate the clitoris, labia, and G spot simultaneously. It will work better with a intensity control like the Eden Wand. The clitoris and labia are very sensitive areas to most. Starting with too much power could make for an unpleasant experience. 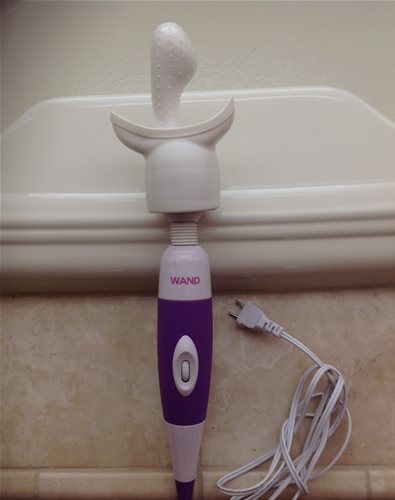 This attachment - due to it's size - may be more suitable for med level or advanced users. A intensity control like the EdenFantasy Wand will help with the vibrations. However, the G spot head could be too large for some beginners. I think most beginners would love to take it as a challenge though. And have fun trying; most wand users are not beginners, anyway.

This is super for clitoral stimulation, that's where the vibrations are the strongest. The G spotter shakes and is not as lengthy as most rabbits. This attachment is great for foreplay. This is a good to use right after some intense clit play.
This would also be great used on a sex mount.

Some G spot toys are also good for men's P spots. This one is not.

The DS attachment sleeve only comes in White.

This is made of TPR and fairly soft and flexible. It does not have any odor whatsoever. The G spotter has nubs all over it, about 1/4 inch apart. The clitoris/labia simulator also has many nubs on it. There is also a seam on the head in the very middle. One can not feel the seam though. 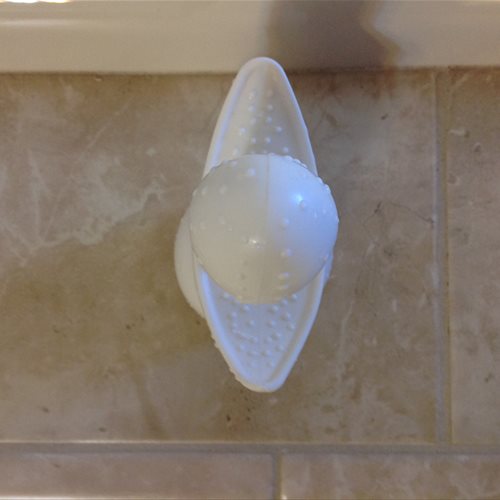 TPR is softer than silicone. So the softer material allows for more vibrating sensation, but makes inserting the G spotter into the vaginal more difficult. It bends very easily. Best to be very warmed up by using the wand directly on the clitoris before attempting insertion. Even then, one may still require some lubricant.

The length of G spotter is 4 " and 1 1/2 " at it's widest.
The labia/clitoris stimulator is 4 " but when pressed/flattened out against your body will spread out to 5 ". It is curved and very soft and flexible.
The diameter of the wand head sleeve has a circumference of 2 3/4". It is fairly stretchable and will fit a slightly larger head easily. 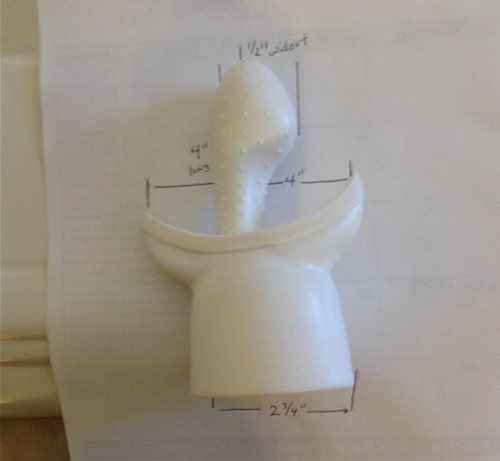 The G spotter is quite pronounced as you can see by the pics. The only question will be the location of your particular G spot. The shape of the clitoris/labia simulator is tapered for a perfect fit. Most the vibrations will be felt on the clitoris.

When it comes to size vs strength of vibrations, vibrations will always win. So in this case, size does not matter.

The G spotter is the same size as the larger end of the Njoy Pure Wand. 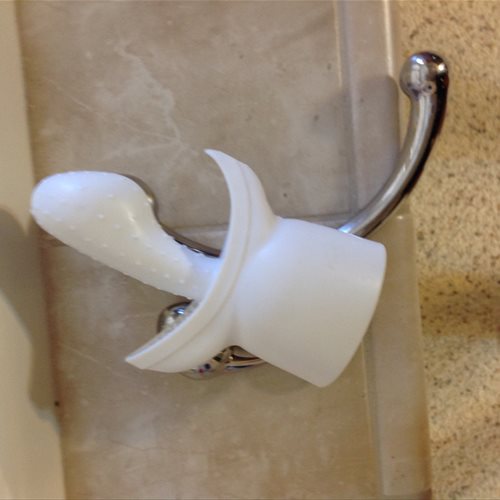 Here is how it compares in size to some other smaller toys. 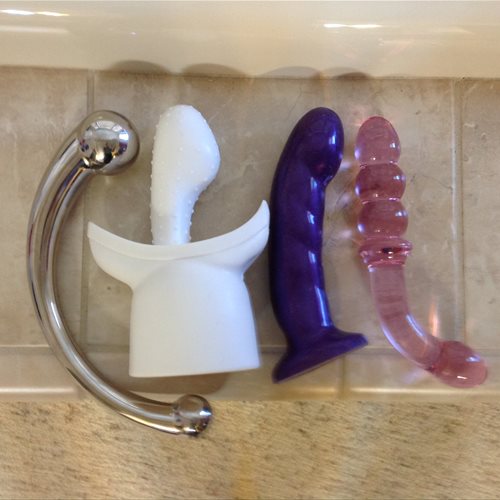 This sleeve is made of TPR and is porous, but waterproof. However, since it is attached to an electrical piece of equipment, it CAN NOT be used in the shower or tub. It is best used in bed as most wands have some weight to them.

Most the vibrations will be felt on the clitoris and labia area. As a matter of fact, it shakes so much it is hard to judge how much the G spotter is shaking.(The video showed the difference in where the most vibrations take place.)

O. wife recommends a wand with a intensity control when first using this attachment. It can be a shock to get vibrated so violently when starting out.

The material TPR: Thermoplastic Polymer, is less porous than Cyberskin but more porous than silicone. Of course the safest material is glass and stainless steel when it comes to material safety.

TPR toys should only be cleaned in warm water and antibacterial soap or a toy cleaner. Do not boil TPR or put in top shelf of dishwashers.

Silicone or water base lubricant can be used. I would recommend water based though. I read the body can more easily absorb silicone based lubes. I would also recommend if you have issues with itching or apprehensions of TPR to use a condom on any TPR toy.

TPR can collect dust and hairs etc easily, so its best to wash the attachment before use. Best to store near your wand of course. If taking your wand on a trip of course toss this in a baggie and put in the suitcase also. If any TSA agent asks you what is that white thing, tell him/her it is a Dual Stimulation sleeve and you can get one at EdenFantasy.

This came in a clear plastic cello bag along with the EdenFantasy Wand. We ordered both at the same time. When one orders an attachment or several EF, gives a nice discount. Check the page for current promotions. Always good to save some bucks.

No instructions were included or needed.

Many G spot items are also good for a male's P spot. I tried the Dual Stimulation attachment on mine. (for testing purposes of course) I found this not to be effective on my prostate and that region. The labia part shook my underside, but I could not feel the bulb part inside doing much.

Ow also agreed the labia/clitoris part is strong, but not as much inside her vaginal.

All in all she likes this attachment. It is going to be the closest thing we get to a Sybian machine.

Here is Ow's experience with the Dual Stimulation attachment. Her intial comment was, "Doesn't look like much."

After some finger rubs from me on her clit, she continued to warm up with the Eden Bendable Buddy. I put the DS attachemnt on the Eden Wand. We also have 2 other wands, but chose the Eden since it has a intensity dial.
She found the length of the wand with the attachment on hard to insert into her vagina. Her arms just aren't that long. She put the attachment in by itself then connected the wand head to it. That was much easier.

She started the wand on low and eventually turned it up to about 75% power.

After 15 minutes, I inquired,"How is it ? " Her reply, "Just ok." Ten minutes later, she said,"It's good."
We were watching a movie on TV and later I noticed her smiling with her eyes closed. As always, she will never admit if she is having an orgasm. Fifteen minutes later, I entered her and she was super wet. Admitting it or not, that was proof enough for me!

In the ensuing weeks she used it several times. I always noticed the same thing. She always had a big smile on her face after about 30 minutes of use. Also if she did not warm up adequately, the DS would not go in w/o lubricant.

Curved massager attachment
$9.00
Follow-up commentary   I still like it 5 months after original review
Still a great part of Ow's rotation. Shakes, rocks and rolls ! Great to use afer warmed up with the wand !
This product was provided free of charge to the reviewer. This review is in compliance with the FTC guidelines.