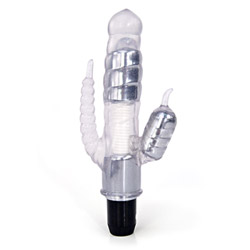 This toy is perfect for people who like strong shaft vibrations, have the anatomy suitable for the clitoral stimulator to reach, and have patience for jelly toys. I don't recommend it to beginners, but it's still a fair amount of fun.
Pros:
Inexpensive, powerful, and novel, this waterproof wonder will provide lots of wet fun.
Cons:
However, it's battery guzzling and jelly material may ruin the fun.
Rating by reviewer:
4
extremely useful review

The design of this toy is your standard triple stimulator design. The anal stimulator is (in my opinion) kind of short, and has the tendency to slip out if you move around too much. The size of the toy is great, just big enough (five inches circumference and five inches long for the shaft), but the clitoral stimulator is not. I've come to the conclusion that my anatomy must be strange, because this toy (along with the last two or three rabbit vibes I've had), just doesn't reach my clitoris. The attachment either buzzed right below or right to the side of my clitoris, and I had to manually hold the tip in place to get any stimulation, which was a bit of a buzzkill (pun TOTALLY intended). The design is not at all discreet. It's completely obvious what it is, and don't expect to be able to get away with leaving it in the open if you're shy.

The vibrations of this toy are in the main shaft, and in the clitoral stimulator. The vibrations are amazingly strong, and a whole lot of fun. However, I'm not a big fun of vibrating shafts, and I have a really strong fondness for dual control boxes on rabbits, so I can turn off the shaft vibrations or rotations (which this toy does not have) and focus in on clitoral stimulation. However, if you like shaft vibrations, this is the perfect toy for you! The vibrations carry well into the anal stimulator as well. The controls are not very convenient (a turning knob at the base of the toy), but it does make it waterproof, which was novel and fun. The toy performed very well in the shower, and even held up to being submerged in the bath. However, be warned that this thing is a battery vampire. It completely drained a full new set of batteries in one session. I'm not a big fan of that.

This toy is, as stated above, made of jelly, which means it's not that safe. I would generally suggest using this toy with a condom both for safety and hygiene reasons, but since it's a triple stimulator, you'd have to use two condoms a session. Jelly though, is rather easily cleaned, and since this is a waterproof toy, you have the added bonus of being able to submerge it, rinse it off in hot soapy water, and store it quickly. Just know that you can't use boiling water and you will never be able to fully sanitize this toy, so I would keep it only for solo use. It's easy enough to store in a sock or panty drawer (or if you're like me, a toy box).
Follow-up commentary   I don't like it anymore 1 month after original review
The intensity of this toy is becoming fairly overshadowed by the amount of batteries it runs through. Maybe I'm just spoiled by having toys that are rechargeable, but I can't justify using this toy much, since every use runs through a pack of batteries. If you have rechargeable batteries and don't mind losing power quickly, you might still like this one.
This product was provided at a discounted price in exchange for an unbiased review. This review is in compliance with the FTC guidelines.