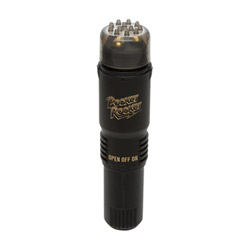 We Have Lift Off!

Plastic is very rigid. It does not bend. This makes it optimal for transferring vibrations. Plastic is also body-safe and phthalate-free. Plastic does not absorb lubricant, but it can require lubricant to glide across the skin if not too aroused. This product was not meant to be inserted, so lubricant doesn't need to be used on it if you do not want to. The Pocket Rocket has no smell or taste.

There are three bulbs on the tip of the Pocket Rocket. Depending on how you use your Pocket Rocket (at a 90-degree angle to your body or parallel to your body), you may or may not feel these bumps. These bumps are situated in a triangle-like fashion, and you may not feel the individual bumps during use because of that. The bumps do not seem to add any extra sensation to your play either, but they are part of one of those traditional appearances of Pocket Rockets. If you want to add sensation, make sure to use the attachment that this Pocket Rocket includes.

The included attachment has nubs on the tip of it. These nubs are not the spikes that some other Pocket Rockets have, but instead, are little nubs that stick out but aren't painful. During use, these nubs are not painful either. Instead, they add an interesting texture that is interesting to use. Make sure to use lubricant if you use the attachment as the nubs can be painful when rubbed against while dry. Along with that, the rubs work best for those that don't apply too much pressure as applying too much pressure with these nubs can be painful.

This Pocket Rocket is compatible with all types of lubricants including water-based, silicone-based, and oil-based. Water-based are the easiest to clean off of this sex toy though.

This is definitely one of the better pocket rocket vibrators that I've used. The battery compartment attaches easily and has no issues with the metal connector, and the attachment that comes with is pleasurable - unlike some of the other spiky ones that come with other pocket rockets. The plastic is very soft and smooth, and the it's definitely noticeable that some good design went into this. The toy is clean and attractive-looking, and the ridges along the body make it very easy to hold this toy - even when your hands are lubricated. I'm really fond of the Pocket Rocket, but I do wish it had a bit more power to it.
This product was provided free of charge to the reviewer. This review is in compliance with the FTC guidelines.