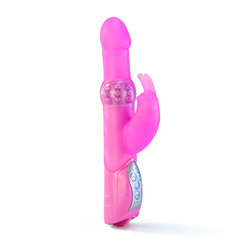 Wow ! Winner First Time Out Of The Gate

Layla is a great super rabbit! Ow loves clit vibe. This does it for her clit of steel. Then by the time the rotating shaft does it's magic it's a super-duper experience. Anytime my wife is satisfied, it's going to be my turn next for a super time!
Pros:
Tremendous power, multiple settings, shaft rotates at a wide radius, easy to clean
Cons:
Can not stand up on it's base. Collects lint, dust and hair easily
Rating by reviewer:
5
extremely useful review

This is not a large toy and should be suitable for all users. This is smaller that the average male's erect penis. Please check the measurements on product's page and on the review if you are concerned about sizing.

This can be used for solo play and foreplay before intercourse. It is waterproof and can be taken in the shower. 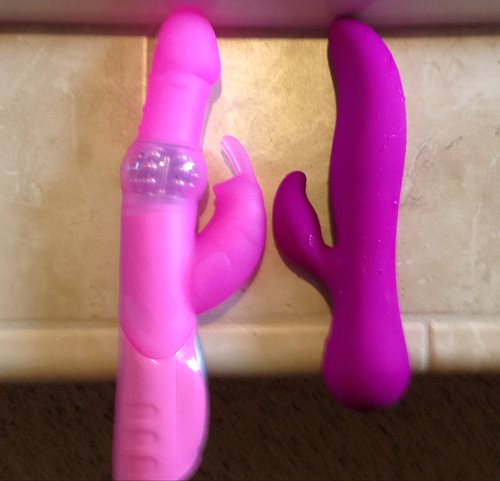 Layla is made of high-quality body safe silicone. No odor whatsoever. It is hypoallergenic, latex and phthalate free and non-porous. It will not harbor germs and will be easy to clean. The first 3 inches of the shaft are soft and has a very very slight drag.

The ears to stimulate your clitoris are soft and firm.

Layla's texture should not be a concern for any users.

The entire toy is measured 10.5 " long.
The shaft has a 1 1/2" wide head and tapered for easy insertion. The head if firm but soft.
The head is 1 1/2" long. Right under the head are a set of nubs. Ow said she could not feel them during use.
Three inches further down the shaft are the rotating beads. The band of beads are 1 3/4" wide.
I measured the insertable part of the shaft to be 5 ".

The clit vibe motor is fairly large and will provide a lot of power.
The positioning of the ears for rubbing the clit was perfect.
The ears are positioned 1/2" away from the shaft. The pair of ears are 1 inch long and soft and flexible.

Layla is not a fairly large or small toy. 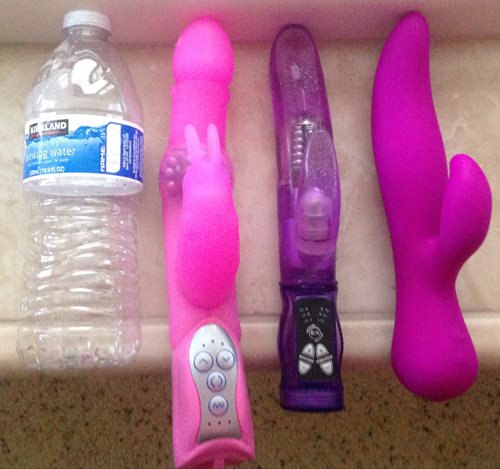 Here is a comparison pic 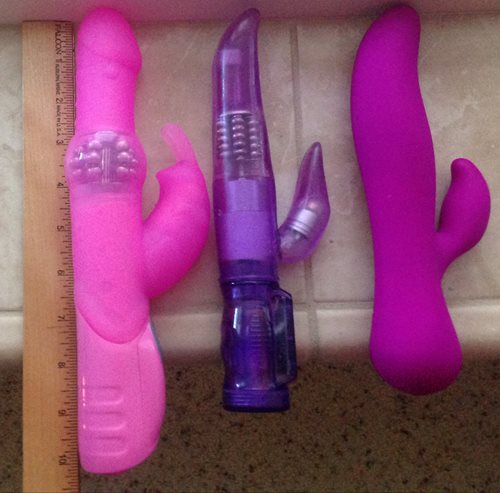 Layla is ergonomic. The space between the clit motor and control panel make it easy to grasp. It is also not wide there either. Even if excessive lubricant is applied or she is wet, it is easy to hold on to.

Layla is great for travel. It will not turn on accidentally in your luggage.

Ow likes toys with easy to use functions. And just the right functions and modes. The Layla fits this bill perfectly. She doesn't like the toys with a ton of modes. Too many makes it difficult go back to the one one wants. Also, sometimes too many choices complicate things.

Layla has a waterproof design control panel. There is also an o-ring inside the battery compartment. The battery cap also locks in place as shown in my video demo. It can be taken in the shower and washed under running water to clean. However, I did not get to test Layla underwater. Ow would not allow me to take a chance with her new gem.

The bottom-most button controls the clit modes. Just depress to cycle thru them. It can only go forward. There is not a back function. The 3 dotted lights on the lower end of the panel will flash, dance or stay on depending on which pattern/mode it is on. To turn off the clit vibe simply hold down the button for 5 seconds.

The shaft/rotating beads has 3 speeds. Low, med, high. It only increases in speed and not the twirling radius. There are separate up and down button to control the speeds. To shut off, hit the down buttons until the shaft stops moving.
The shaft on Layla rotates like none other seen before. This was demonstrated in the video. If you didn't see it please watch the video. You will be impressed!

The button in the middle is not an on/off button. It controls the direction of rotation. There are 3 dots above the up and down buttons that indicate which speed it is on.

Layla is powered by 3 AA batteries. The more high powered batteries a toy has the more punch it will have. No puny AAA's for Layla! Of course if Layla is not going to be used for long period of time, best to remove the batteries. Leave the white battery pack inside though for safe keeping. 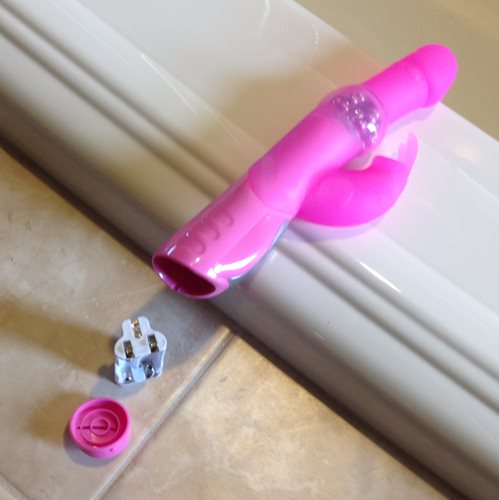 
EF recommends you use a water base lubricant.
You can wash this with warm water and soap. Once in a while we like to really sanitize our toys and use Cleene toy cleaner. That is the one advertised when you go to checkout when making a purchase from EdenFantasys. 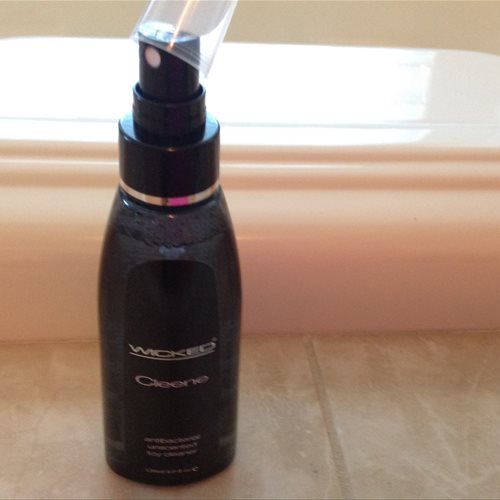 Layla attracts dust, lint and hair like crazy. While making the video and typing this review I had to constantly clean her. So best to wash her before and after every use.

Layla arrived in a vanilla shipping envelope and was cello packed. No instructions were included. The control panel direction buttons were enough. The speeds and modes are easily recognizable when you play with the rabbit.

Layla was a winner on her first use. Since it is hot pink and has a girl's name, I label this rabbit a "her".
The clit vibe is powerful and shaft twirls like none ever experienced before. We appreciate the price. This costs much less than other luxury rabbits and performs better!

The powerful clit vibes hit a home run. Then when used with the high speed rotating shaft a "Grand Slam" !

Ow always likes a lot clitoral stimulation before doing anything. After getting familiar with the clit vibe button, she was ready to go. She positioned the ears on her clit without inserting the shaft. She played with the different patterns until settling for the rollercoaster one. Thirty to forty minutes later she was ready for the rotating shaft and beads. She always likes the functions of her Jopen Vr-7. The J V-r 7 also has a power clit vibe and a rotating shaft. The Vr-7 always left her wet and satisfied.

While the rabbit ears were still doing its magic, she inserted the shaft. She said she was glad it was not too long or thick. I think she tired of the Fun Factory Drei for that reason. After few minutes of both motors running, she gave out a subdued "Ohh!" I asked, "How is it ?" No reply from her, just eyes closed and smiles. After 20 more minutes I stopped her and did my "Dip Test". I said to her, I guess you liked it!

When I entered her, I validated her satisfaction. Very very wet, hot and juicy!
Every experience with Layla produced the same results. Guess the Drei will be exclusively mine from now on.