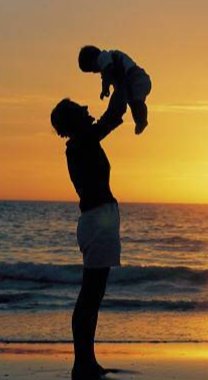 Blindgossip.com
While I do acknowledge that a father has rights, I simply can't view a scenario in which they trump a woman's rights.
For me, the implications of the phrase "the rights of a father" bring to mind the ever-great and continuous abortion debate. I was once discussing abortion with a close male friend and he said that he was pro-life. I respect other people’s choices, and while I disagreed with him, I wasn’t offended. That is, until he stated that he would never date someone who was pro-choice.

It wasn’t so much that he said it (I don’t really see myself having sex with someone who wouldn’t respect my right to choice), but how he stated it. He said he didn’t like the idea, and that he had a right to keep his child. “What about my rights as a father to make a decision regarding my child?”

And in that is a difficult question: what about a father’s rights to his child?

But while I think that a father does have a right to his child, I don’t believe that it trumps a woman’s right to choose. In short, if a woman does choose to continue her pregnancy full term and have a child, the father certainly has a right to be involved in the child’s life. But I don’t think that a woman who doesn’t want to carry her pregnancy full term should have to because the father wants to keep the child.

Another friend offered an alternate scenario. What if a woman becomes pregnant, and the father wants the woman to get an abortion, however she chooses not to? Should he be forced to pay child support for 18 years even though he didn’t want to keep it in the first place?

To that I present a difficult answer: a man relinquishes control at conception. While it seems unfair due to the lack of birth control options for men (they really only have condoms which aren’t very effective), I personally can’t suspend the rights of a woman to choose what happens to her body. That’s why I think it’s so important to do all you can to prevent yourself from being in that sort of situation in the first place.
Tags:
Views: 1560
Related articles